I've spent most of the past two decades in East Asia, holding lecturing and publishing positions in Hong Kong, Japan and South Korea. Among my favorite places are Taiwan and the Philippines. I'm fascinated by local religions and customs, and enjoy reading about history and how the English language changes and develops. I enjoy writing on InfoBarrel. If you love writing, sign up today.
InfoBarrel is a writing platform for non-fiction, reference-based, informative content. Opinions expressed by InfoBarrel writers are their own.
InfoBarrel > Environment > Green Living

Hundreds of millions of people travel overseas each year, and a good many of them fly to other continents. The impact of tourism on the the Earth's environment has become massive, not least because air travel generates carbon dioxide. What's more, jet-aircraft contrails exacerbate global warming. Like clouds, they stop infrared radiation reflected by the Earth's surface from going off into space, trapping it in the atmosphere. But if you don't have a yacht and the time needed to sail it across an ocean, you probably have no choice but to take an airplane if you want to experience distant lands and cultures.

Wherever you're going, the steps you should take to minimise the environmental impact of your vacation or business trip aren’t so different from what travellers everywhere should be doing. Each time you make a purchase, return bags or excess packaging.

In your hotel room, adjust the air-conditioning so energy consumption is reduced. There's also a selfish reason to do this: You're less likely to catch a cold; the smaller the difference between room temperature and outside temperature, the less of a shock it is to your body when you venture outside. If you're not going to use the refrigerator, disconnect it if possible - and suggest to the management that they keep all friges disconnected unless notified by guests who plan to make use of them. Try not to waste water ("If it's brown, flush it down. If it's yellow, let it mellow"). Additionally, separate your trash so as much as possible can be recycled. If there's only one garbage can, leave obviously recyclable items such as beer cans, wine bottles and newspapers on the floor next to it, so housekeeping staff can dispose of those items separately.

Green hotels which incorporate sustainable architecture and which follow ecofriendly principles now operate in many parts of the world.

Credit: Wikimedia CommonsPublic transportation is obviously better than driving a rental car or taking taxis. Buses and trains will also save you money but, of course, aren't so flexible. Consider walking or cycling - better for you as well as being the best possible option for the environment. What's more, you'll get more chances to interact with locals, and you'll likely see things you'd otherwise miss.

To minimize food miles, eat local foods rather than imported produce. This way, you'll also be bolstering local agriculture. In hot countries, it's essential to drink plenty of liquids. Instead of buying several bottles of mineral water each day, bring a nalgene bottle (good for hot as well as cold drinks) and refill it at public water fountains. In the Philippines there are places where you can fill containers with filtered water for a very small amount of money. Unfortunately, these are usually in residential areas rather than in neighborhoods frequented by tourists.

Before leaving home, try to find out if there certain types of food which you should avoid to protect local ecosystems. For instance, is the seafood taken from coral reefs? Is fishing done in a sustainable manner? Is all the beef imported, or is it possible for steak addicts to get a fix without adding thousands of food miles to their carbon footprint?

If the country still uses a lot of disposable tableware, such as the cheap bamboo chopsticks favored by eateries in many parts of Asia (the picture here shows a trash can full of them in Japan), do carry your own cutlery. If you're heading to Thailand, consider carrying a plastic box roughly the size of an iPad. The chopped fruit sold by streetside vendors in those countries is delicious and healthy, but always comes in a plastic bag. With your own box you can enjoy it morning and afternoon without a plastic bag being added to the garbage tip each time. 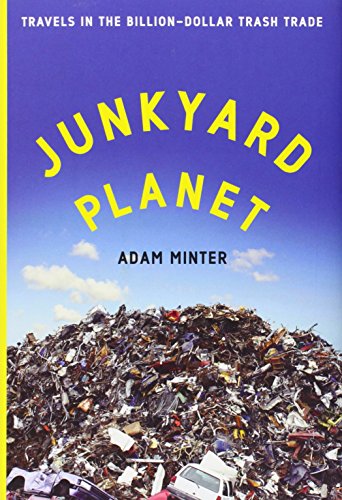 Junkyard Planet: Travels in the Billion-Dollar Trash Trade Amazon Price: $26.00 $5.99 Buy Now(price as of Sep 8, 2015)
Wondering where you old cellphone goes? This is the book for you.
Next >> Top 10 Most Amazing and Creative Recycled Art Displays