I am Bill Hunter, an avid hiker. For hiking related articles, see the following: A Thrilling Trek to the Key Hole on Longs Peak An Exhilarating Hike to Scenic Hallet Peak Best Hike for Kids in Rocky Mountain National Park  Love to write too? Join me on here on InfoBarrel.
InfoBarrel is a writing platform for non-fiction, reference-based, informative content. Opinions expressed by InfoBarrel writers are their own.
InfoBarrel > Sports > American Football

Despite recent negative press about the risks of playing football, the sport remains wildly popular. The National Football League is an unstoppable money-making machine. But could  the early, voluntary retirement of a star 24-year old NFL linebacker be the “yellow flag” that changes the field position?

Blowing the Whistle on Brain Injury

Football is not good for your brain. Is it really a surprise that hitting people with your head repeatedly at high-speed can cause brain damage? The difference now, is that we have evidence[8].  Researchers at Boston University have now found signs of chronic traumatic encephalopathy (a severe degenerative brain disease) in nearly 60 former professional football players when their brains were analyzed after their deaths[9]. Retired football player are also more likely to have depression[7].

As if the potential for brain injury is not bad enough, there are other risks. Professional players are also susceptible to higher than average radiation exposure. For professional football players CT scans to check for injuries are frequent, along with massages to help heal their bruised bodies. One CT scan can expose you to as much radiation as up to 1000 conventional chest x-rays[6]. CT scans of the head are the most risky. Not only that, football players travel by jet much more often than the average person, which exposes them to more radiation in the upper atmosphere. They don't get as much exposure as pilots or flight attendants, but exposure is cumulative.

Stress on the Heart

Football players might be at high risk for heart disease. High-functioning athletes should have strong, healthy hearts, but are human hearts designed to support 300 pound bodies that run the 40 yard dash in under five seconds?

Making matters worse, football players, in general, don’t have great diets. Usually they eat to gain as much weight as possible. During training, they can consume 5,000 -10,000 calories a day[1]. Can you imagine the volume of vegetables you need to consume to gain weight when you are over 300 pounds. To be fair, during the season most NFL players probably eat fairly well. Team nutritionists make sure of that. But in the off-season, and especially in retirement, they are likely to eat as much but are far less active[2].

Let’s not forget that football players are celebrities and as such, they have all the problems that fame brings, like family members and “friends” who expect money and favors. In some ways, NFL players are like lottery winners. They achieve almost instant wealth without learning how to manage the associated stress. Many studies show that lottery winners, in the end, are not any happier [3].

Despite the risks, millions of kids fantasize about playing professional football, and tens of thousands play the game at the high school and collegiate level. Young men are notoriously bad at evaluating risks so perhaps the NFL has nothing to worry about.

But recently, San Francisco 49ers linebacker Chris Borland, one of the NFL's top rookies, retired after one season because of the risk of long-term effects of repeated head trauma[5]. He was on track to make millions of dollars over the next few years, but decided the money was not worth the risk. "I just honestly want to do what's best for my health," Borland told "Outside the Lines." "From what I've researched and what I've experienced, I don't think it's worth the risk."

Is Borland an exception? Time will tell, but his early retirement has garnered much publicity, despite the NFL officially downplaying the news[4].

In the unlikely event that football has in fact peaked and fewer kids play football in the future, how will that affect professional football? Probably very little, but the quality will decline, as the better (and maybe smarter) athletes migrate to other sports. Those who stay in the sport will have shorter careers, and demand more pay to account for the risk. The game might actually get more dangerous. Knowing that their careers are short, perhaps only a year or two, players might play more recklessly, hoping to cash in on a big paycheck before they get out. Players will become even more like gladiators, playing Russian roulette with their brains. And people will continue to watch in large numbers. 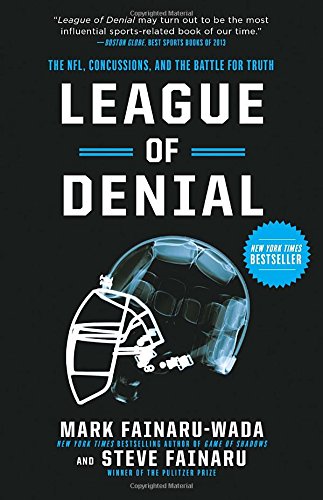 League of Denial: The NFL, Concussions, and the Battle for Truth Amazon Price: $16.00 $5.00 Buy Now(price as of Oct 3, 2016)
Next >> Fantasy Football: Harmless Fun or Unregulated Illegal Gambling?