King Edward I, King of England and

Oppression Of The Jews in Early England

As a historian I have always associated the phrase "The Jewish Problem" with Adolf Hitler and Nazi Germany. Whilst researching King Edward I, King of England (1272-1307), I became aware of a much earlier link to this phrase.

Edward was abroad, fighting in the crusades,  when his father died and he took some time to return  to England. (No emergency flights in those days). On his return, one of his first actions was to convene Parliament in 1275 to enact new Acts of Parliament, to organise the state more effectively. One of these Acts was to forbid Jews to practise usury, (money lending),ordering them to live by trade instead. The Jews were the main money lenders and thereby the King was depriving them of their right to conduct business.

The History Of The Jew In England

Only  Christians could receive  protection from the church and therefore  as non christians the Jews could only beg protection from the King. The majority of Jews in England had come from France and Germany; possibly because from 1066 the English Kings  ruled so much of the continent,setting a precedent for travel between the island and the continent. During the reign of Richard I (1189-1199) they had suffered a massacre at York and during the reign of Henry III Jewish wealth was extracted from  in the form of taxes. The result was that the Jews had no one in a position of power looking after their interests,

At the time of Edward's accession to the throne the jews were impoverished and were therefore of little value to the treasury. It has been viewed that Edward's attempts to forbid usury and encourage trade were to make the jews more acceptable to the population in general. However this argument does not hold water when viewed with his subsequent actions where he decreed that all jews should wear special clothing. This mirrors the actions taken by Nazi Germany in the Second World War.

The Act provided that "each jew after he is seven years old, shall wear a distinguishing mark on his outer garment that is to say two strips of yellow cloth, six inches long and three inches wide"

In 1278, the jews were accused of "clipping the coinage" - taking a small part of each coin away to melt down.  Whether they were actually guilty is debatable it could have been  Edward's treasury  looking for scapegoats to cover their own actions, Retribution was swift; three hundred jews were found guilty and executed for this offence.  Again this mirrors Nazi Germany where Jews were used as hostages and executed in disproportionate amounts for offences against the Nazi state.

In July 1290, Edward expelled the jews, ( about 16,000 people) from England. This was a popular move within the country and Parliament voted King Edward I a monetary grant  for taking this action and succeeding so well. 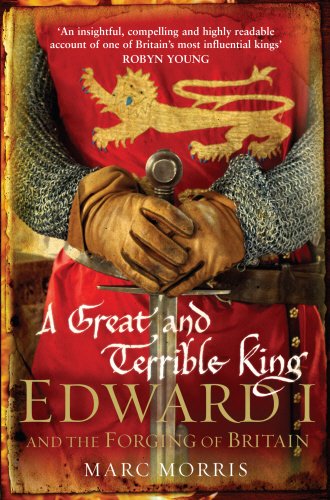 A Great and Terrible King: Edward I and the Forging of Britain Amazon Price: $9.16 Buy Now(price as of May 5, 2015)
It was not only the Jews who suffered- read on for more details

Perhaps by modern standards his oppression and vile treatment of the Jews could be viewed as a heinous failing. His attitude was popular within the country and at this time the phrase "The Jewish problem" came into popular parlance.