Risks of Alcohol Use - Especially in Teens

Many people, even social drinkers, occasionally have too much to drink.  Sometimes when they are suffering from a severe hangover or they have embarrassed themselves by behaving in a foolish manner, they may wonder if they have a problem with alcohol.  Teens and young adults may not be aware of the dangers of consuming alcohol, or the risk of alcohol poisoning.  There is so much misinformation about alcohol that is passed around, that I thought I would check with the National Council on Alcoholism and Drug Dependence to investigate the real alcohol abuse facts for anyone who is either concerned about their drinking or who wants to be reassured that the amount they drink is not a serious problem.  Listed below are some of the interesting facts I learned from the experts.

While it is not always understood why these facts are true, they are interesting and could be helpful in understanding the behavior of people in your life.

Alcoholism is most common in people who earn less than $10,000, and lower in people who earn over $25,000.  Of course, this may only indicate that people find it increasingly difficult to earn a living when they abuse alcohol.  These income levels were based on a 1998 study by the National Institute of Alcohol Abuse and Alcoholism.  Therefore, they would be somewhat higher today.  However, the general theory would remain the same.

About 21% of men and 10% of women are considered heavy drinkers.  Heavy drinkers are defined as people who drink two or more alcoholic beverages per day.

People who admit they have driven after drinking more than the legal limit at least three times in the past year are nearly always either suffering from alcoholism or a problem.

You can be an alcoholic even if you “only” drink beer or wine.  In fact, 59% of the people who have ever received treatment for a substance abuse problem said they preferred to consume beer.

About 43% of the people who are treated for alcoholism have revealed that they have a family history of it in a near relative.

The NCADD also reports that approximately 18 million Americans have alcohol problems, and more than 9 million children live with a parent who is dependent on either alcohol or illegal drugs.

Adult alcohol abuse can have other serious consequences for children, too.  For example, fetal alcohol syndrome is the leading known cause of mental retardation.

In addition, approximately one-fourth of emergency room admissions are alcohol related, as are about one-third of suicides, and over one-half of homicides.

If you are concerned and want to know more about alcoholism in the United States, I highly recommend this Amazon link to the book "Under The Influence: A Guide to the Myths and Realities of Alcoholism."

The numbers above were primarily based on research involving adults.  However, the National Council on Alcoholism and Drug Dependence also has also accumulated research statistics on teenage alcohol abuse.  Here are some of their findings:

In a survey of American teenagers, they learned that the average teen consumed their first alcoholic beverage before they were 13 years old!  This may be a shock to many parents who have no idea what their children are doing.

Teens that began drinking before the age of 15 were four times more likely to have problems with alcoholic beverages as adults than people who waited to have their first drink after the age of 21.

Alcohol is a significant contributing factor in teen accidents, homicides and suicides, and these are the leading causes of death among teens.  Consequently, ignoring the abuse of this substance can lead to problems that are far more devastating.

According to a 2010 report, drinking kills six times more young people than all illegal drugs combined!

Alcohol consumption is also a contributing factor in approximately two-thirds of the incidents of sexual assault and date rape in teens and college students.

Teenage drinking can result in brain damage, and it can have long-lasting, possibly permanent, effects.

Researchers have reported that about 88% of 10th graders and 75% of 8th graders admit that they find it either very easy or fairly easy to get alcohol.

If you are a concerned parent, I want to assure you that not all the news about teenage alcohol abuse is bad.  For example, just because teens find it easy to obtain alcohol does not mean that they are all consuming it.  In fact, according to two studies undertaken by the University of Michigan and the National Survey on Drug Use and Health, performed by SAMHSA, we have a lot of positive news about teen drinking.  SAMHSA is the federal government’s Substance Abuse and Mental Health Services Administration.  Here are some of the facts that they found:

These studies also found a slight decline in the amount of binge drinking in 12 to 20 year olds, and a slight decrease in the number of teens who drove while under the influence of alcohol.

These statistics will change from time to time.  If you want to have the most current information available, you should either check the government’s Substance Abuse and Mental Health Services Administration website or the National Council on Alcoholism and Drug Dependence website.  Teens often believe that “everyone” is drinking, and they need to drink, too.  However, having accurate abuse statistics may help them realize that they don’t have to drink to have friends.  In addition, educating teens may help make them aware of just how dangerous alcohol can be.  Having the real alcohol abuse facts may also help you decide if someone you love has a problem.

If you are interested in learning more about alcoholism, treatments for alcohol abuse or Alanon, you may also want to read some of the articles listed below:

Why an Alcoholic’s Family Gets Frustrated

Learn More About this Serious Illness 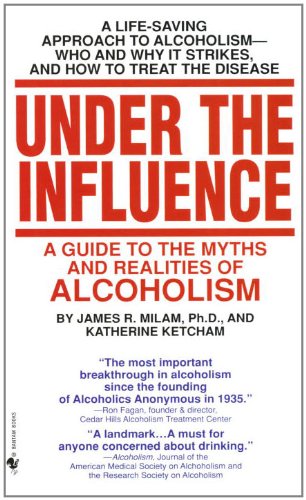 Under the Influence: A Guide to the Myths and Realities of Alcoholism Amazon Price: Buy Now(price as of Jul 9, 2014)
This book contains information that is important to many families of alcoholics, including how to find the appropriate treatment.
Next >> Death of Karen Carpenter