I have never really thought of myself as someone that suffered from SAD (seasonal affective disorder) but in the last 10 years or so, I noticed a serious drop in mood right after Halloween.  It also seemed to time right in with the hour back time change we do here in Southern Ontario in the October/November.

I would find that I was dragging myself around and would feel very guilty for not being excited at Christmas time as I once was.   But this year was exceptionally bad because we had just moved to another city and the place we are renting tends to have dark rooms.  The light just doesn’t seem to get in here and I work from home.

I headed out each day with my dog for a long walk trying to shake this fuzzy odd feeling from my head and mood.  I would be snappy and cry easy.  But after hubby and I chatted I realized that by the time we got to my son’s birthday (he is all grown up now!) mid January I seemed brighter.  But come February it would be back again as the days were usually gray.

There would be a lot of snow in January but more sunny days that I would be out in.  It just seemed to really concentrate in November and December as a problem time for me.

As I thought back I also realized that I had a horrible time on our “dream trip” to Scotland a few years back because I could not adjust to the time change.  I had serious jet lag that did not get better until I got home, and many of the symptoms were the same.

I didn’t want to take drugs, but I wanted to do something.

Credit: amazon.com I decided to talk to the pharmacist about these light therapy boxes.  I wanted to try this first, and if that didn’t work I would head to the doctor.

After talking to him about how to use it, I started off as soon as I got up with 15 minutes.  It is a beautiful glow I really enjoyed it and for a moment almost thought it was summer.  You do not stare into the light box, but simply set it up somewhere within a couple feet of you.  Your eyes have to acknowledge it but don’t stare at it, or it would be like staring at the sun.

These light therapy boxes, imitate day light and since I am not a Doctor, I don’t know all the intricate details and facts, other than this is not the same as simply turning on a light in your house, this actually gives your brain a boost of light.

I was told to try 10 to 15 minutes a day for a few days and then see how I feel.  The first day I really didn’t notice much change, but by day 3 my hubby caught me chuckling at something on TV.  I realized that I was feeling a little better each day.

I have decided this is a keeper, and I found that 15 minutes in the morning is good for me.  For the best results, you should keep this up until spring.  Since I am not so bad in January I may cut back to 10 minutes, which still gives you a boost.  But I will add this to my morning routine each fall so that I can actually enjoy events in the autumn. 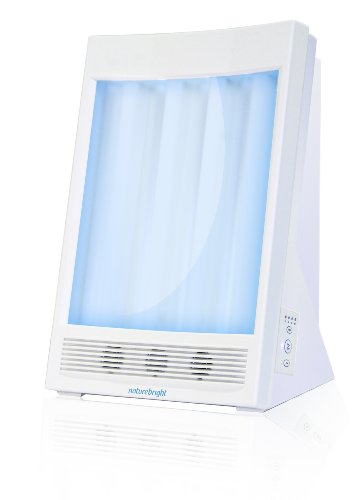 After discovering that many people have this issue, some worse than others especially in the areas that have very short days in the winter, I have recommended this to my friend.  He visited his doctor who had suggested it as well, but my friend couldn’t believe that a simply lamp could fix how he felt in the winter.

Each therapy light box is different, so you want to read the instructions totally.  They have ratings on them for how long you can spend in front of them based on how far away from them you are.

I think in my case the time change in late October upsets my internal clock and it takes a couple of months to get used to it, plus the tendency to be indoors more during this time doesn’t help.  But this light box therapy has really brightened my mood and outlook.  I am looking forward again instead of simply dragging myself through the day loaded up on coffee!

Always check with a doctor first if you are not well, but for me this was one of the best investments I made.  As long as I am living in Ontario those days are short come winter, so I will add light to my day.

I have mine set up beside my computer, so that when I first wake up, I turn it on and check a few emails for the 15 minutes I am using it.  If you have to commute to work in the morning, you need to add a little bit of extra time to your morning routine.

You can use this light while you are eating your breakfast, or doing your makeup (it imitates daylight so this might be a great time).

I was warned simply not to use this at night as it will interfere with sleep, so it is best used first thing in the morning.  So give it a try and see if your mood doesn’t lighten after a few uses.

As I have got older, I have become more sensitive to things, such as sleep patterns, eating patterns, moods etc.  I recently added a white noise machine to my room to drown out traffic that was keeping me awake, and I have now added this light box therapy to my morning routine and now everything is right in my world!  Every so often you need to take stock of any changes and see if there is a simple fix.

I now can survive the winter and look forward to the holidays!