Married With Children : The Rise And Fall

In April of 1987 the first episode of Married With Children aired on the Fox Network and The Bundys were introduced to America. While the sitcom provided tons of laughs and seemed to be going full steamed, it was abruptly cancelled in 1997.

If You Didn't Know

The show was created by Michael G. Moye and Ron Leavitt, the two drew inspiration from the 1970's sitcom All In The Family. Before the Bundys, The Cosby Show on The NBC Network presented success, love and family valves to viewers in modern times. Married With Children was the complete opposite, The Bundys were not successful, they stole when needed, and bluntly spoke about sex. While Clair and Heathcliff Huxtable worked as a Lawyer and a Doctor, Al was a poor shoe salesman and Peggy was a lazy house wife. Married With Children became a success due to its difference from The Cosby Show, the life of the Bundys reflected the life of most viewers. The producers at Sony were so focused on being different that during development, the working title was "Not The Cosbys".

Al Bundy who was played by Ed O Neil, is a middle-aged man who works in a lady's shoe store. The greatest moment of his life came in high school when he scored four touch downs in one game of football. He married his high school sweetheart which turned out to be one of the biggest mistakes of his life. Al hates to be touched by his wife but has countless fantasies about younger women with big breast, in reality however, Al has never cheated on his wife.

Peggy Bundy, played by Katey Sagal, is a house wife that refuses to cook or clean for her family and is known as the laziest woman in Chicago. Peggy has very expensive taste and steals Al's money to buy leather coats and other things for herself. Unlike Al she enjoys spending intimate time with her husband. She also have fantasies about muscular men pampering her but she has never actually cheated on her husband.

Kelly Bundy played by Christina Applegate is the first child of Al and Peggy. Kelly is known as the dumb one of the family, she spells cat with the letter K and sometimes forgets her own address. With her lack of book smarts she uses her body to get by in life, she made it through high school by dating most of her teachers.

Bud Bundy who was played by David Faustino can be considered the only intelligent member of the family. Unlike his sister he graduated both high school and college by studying hard. He has never been popular with women and everyone assume he has yet to feel the touch of the opposite sex. Although Bud attempts to make something of himself and tries to be different from his family, he displays the immoral Bundy traits many times.

The Bundys were constantly visited by their neighbors Steve (David Garrison) and Marcy Rhoades (Amanda Bearse). The Rhoades were the successful middle class family, they were both bankers and drove Mercedes. They were the perfect married couple, Steve never drank and Marcy took care of her husband, however after meeting the Bundys they picked up some of their dirty ways.

In the middle of the fourth season David Garrison (Steve) wanted to leave the show and return to his stage acting roots, the producers had no choice but to release him from his contract. The show dealt with Garrison's departure by saying Steve left Marcy in the middle of the night to follow his dream of becoming a Park Ranger in Yellowstone National Park. After divorcing Steve, Marcy drunkenly married a bartender she met at a bankers' event named Jefferson D'arcy (Ted McGinley). Jefferson is the complete opposite of Steve, he is a house husband that lives off Marcy's money and was once referred to as an aging pretty boy. Marcy encourages him constantly to get a job but Jefferson prefers to spend his time caring for his looks or hanging with Al. The show hinted many times that Jefferson has a mysterious past and might have even been a C.I.A agent.

The Rise Of It All

Married With Children was the first prime time show on Fox. The popularity of the show  grew stronger during season three after the episode titled "Her Cups Runneth Over" aired. In this episode Al goes to a sexy lingerie shop in attempts to find Peggy's favorite bra that was discontinued. Terry Rakolta, who is an activist for family values, found the episode so offensive that she began writing letters to Fox and the sponsors to cancel the show. A few sponsors did remove their advertisements and the story of Terry Rakolta attempting to kill the show exploded through the media outlets. However instead of the show being cancelled, the rating rocketed to the top, made the sitcom a hit, and turned Fox into a mainstream network.

Watch any episode from the second season on and listen to the reaction of the audience, they are the rowdiest crowd you will ever hear for a sitcom. Whenever a main character enters a scene, the audience would being cheering and yelling for about 30 seconds. The actors would have to wait until the crowd settled before delivering their lines.The demand for audience tickets were so high that many people had to go on a waiting list.

Bring The Curtain Down

The show was cancelled in season eleven although Fox wanted to bring it back for a twelfth season. When Fox heard that Sony demanded one million dollars for each episode, they figured that the network would not be able to get enough advertising revenue from the show at that price and decided to cancel it. The cancellation was so abrupt that the actors themselves were not aware of it. Ed O' Neil claims that while on vacation he heard about it from a couple reading a newspaper next to him, Christina Applegate also states that she was told from friends. After hearing about the cancellation, Ed spoked to a Fox executive about shooting a final episode in which the Bundy's won the lottery and would be killed by a tornado while celebrating. Fox decided against the idea and Married With Children never received a farewell show.

The saying goes that all good things must come to an end and although the Bundys are gone they are not forgotten. Many networks now air reruns either early in the morning, late at night, or during the weekend. Fans of the sitcom can also find dvd box sets with all the episodes online or in stores. Married With Children was a show that pushed the boundaries and paved the way for raunchy relatable television. 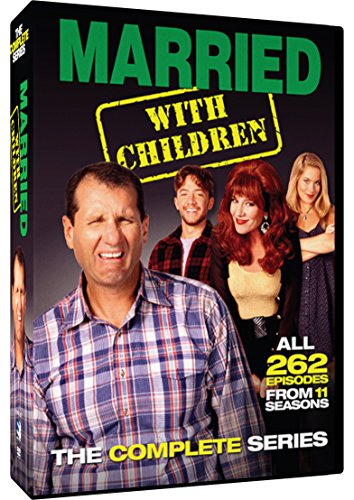 Married with Children: The Complete Series Amazon Price: $27.49 $22.39 Buy Now(price as of Dec 23, 2016)
Next >> Lifetime Cable Channel Releases Yet Another Tell-All About Marilyn Monroe