Buy Dead Man Down cheaply from Amazon or read more articles on film and television. You too can earn money from writing articles by signing up for InfoBarrel.
InfoBarrel is a writing platform for non-fiction, reference-based, informative content. Opinions expressed by InfoBarrel writers are their own.
InfoBarrel > Entertainment > Film > Movies

Certificate 15, 118 minutesDirector: Niels Arden OplevStars: Colin Farrell, Noomi Rapace, Terrence HowardTwo years before the start of Dead Man Down, gangster Alphonse Hoyt (Terrence Howard, Prisoners) had Victor's (Colin Farrell, Fright Night, Total Recall, Seven Psychopaths) wife and child killed, and Victor himself was left for, and believed, dead. Victor certainly seems to believe the saying "Revenge is a dish best served cold" as he has been waiting a long time for his revenge, infiltrating Alphonse's organisation for a year and a half and becoming a trusted member of his crew. Victor has had more than enough time to kill Alphonse, through inaction if nothing else, but he does not merely want Alphonse's death, he wants him to suffer psychologically too from the constant threat of knowing someone unknown is constantly after him. Victor is also seeking the death of all those involved in the death of his family, and not merely the death of Alphonse. Victor was originally an engineer from Hungary, and has since his family's death devoted himself and his skills solely  to the destruction of Alphonse and his organisation.

Credit: http://en.wikipedia.org/wiki/File:Dead_Man_Down_Theatrical_Poster.jpgAs the film progresses, Victor develops a relationship with his neighbour Beatrice (Noomi Rapace, Prometheus), who lives in the same apartment building and whom he can see from his window, and vice versa. Beatrice is scarred from a car crash and is, like Victor, also a damaged person mentally and not just physical. Beatrice wants something from Victor, as she also wants revenge. For her, the revenge is against the man who caused the car accident that scarred her and which, to a large extent, destroyed her life. She saw Victor kill another man from her apartment, and believes he can therefore help her achieve her revenge also.Victor has also become friends with Darcy (Dominic Cooper, Abraham Lincoln: Vampire Hunter, Dracula Untold, Need for Speed), one of the members of Alphonse's crew, which causes him some conflicts as Darcy is digging in to and investigating the mysterious threats Alphonse has been receiving, risking the exposure of Victor's true identity. Victor does not want to kill Darcy, but he doesn't want his vengeance to be thwarted either.Dead Man Down is often slow paced, and Farrell's character is not exactly talkative, but it is also interspersed with some sometimes frenetic action scenes, notably gunfights. The relationship between Victor and Beatrice, both damaged individuals - Victor from the murder of his family and Beatrice from the scarring caused by the car accident - is interesting as it develops and gains in depth throughout the film. Both are attracted to each other, although they are both reluctant to directly admit their feelings. The film seems much more character driven than many revenge thrillers. The primary characters are not as one dimensional as they could be and often are. Victor may start off being a monomaniac in the pursuit of his revenge, with his every act devoted towards it, but he is not completely incapable of experiencing normal human feelings which is gradually shown through his relationship with Beatrice. Dead Man Down is a decent, cut above the average thriller. 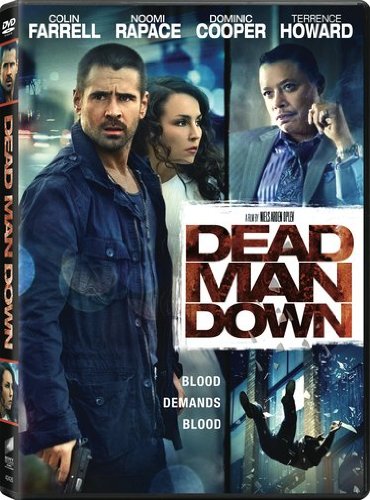