Get Side Effects cheaply from Amazon, or read more articles on film and television. You too can earn money from writing articles by signing up for InfoBarrel.
InfoBarrel is a writing platform for non-fiction, reference-based, informative content. Opinions expressed by InfoBarrel writers are their own.
InfoBarrel > Entertainment > Film > Movies

Certificate 15, 106 minutesDirector: Steven SoderberghStars: Rooney Mara, Channing Tatum, Jude LawIn Side Effects Emily Taylor (Rooney Mara, Pan, The Girl with the Dragon Tattoo) had the perfect life - a nice house in Connecticut, a husband - and then it all fell apart when her husband, Martin (Channing Tatum), is arrested and serves four years in prison for insider trading. When he is released, Martin promises Emily that he will get everything back they lost.

Emily starts to fall apart though, becomes depressed and drives her car into a wall. In hospital after the accident, psychiatrist Dr. Jonathan Banks (Jude Law, Hugo, Contagion) consults on her case and agrees to release her from the hospital in exchange for her agreement that Emily will come to see him regularly.Banks prescribes Emily a number of different drugs - initially, there are problems with the prescriptions; the drugs either don't work properly or there are side effects that she has trouble dealing with and that affect her work. Banks, on reviewing her history, meets Emily's former psychiatrist, Dr. Victoria Siebert (Catherine Zeta-Jones, RED 2), who she saw in Connecticut when she suffered from depression immediately after Martin was arrested but who she stopped seeing after Emily moved to New York to get work.  Siebert suggests a new medication, Ablixa, and everything seems to be going fine with Emily, she is happy with the drug and she is apparently getting better.

Credit: http://en.wikipedia.org/wiki/File:SideEffects2013Poster.jpgThen it all goes wrong. Emily is arrested for a violent crime that she apparently did whilst sleepwalking and that was apparently caused by the side effects of Ablixa. Emily is on trial for the crime, Banks is in court as an expert witness and his Banks' career is quickly in ruins and his own life starts to fall apart, as he gets blamed for prescribing the drug Ablixa, without which drug and its side effects Emily would never have committed the violent crime she is charged with.Desperate to try and save his career and get his life back, Banks starts delving deeper into the case and starts seeing conspiracies all around. This causes more damage to his personal life and career as he becomes obsessed with the case, and he appears to get too personally involved with Emily. Is he onto something, or is the psychiatrist losing it and in need of help himself?Side Effects is a really good thriller. Although it starts off seeing quite predictable, this changes as the film progresses. Much of the film revolves around scenes featuring Banks, Emily or both of them together. Banks appears to be genuinely trying to help people but is quickly getting out of his depth. The film keeps you constantly guessing whether Dr. Banks is right in his suspicions, or is he actually in need of psychiatric help himself, and is everything as it seems? There are a number of twists and complications to the plot which you might not see coming. Side Effects is definitely recommended if you want to see a decent thriller. 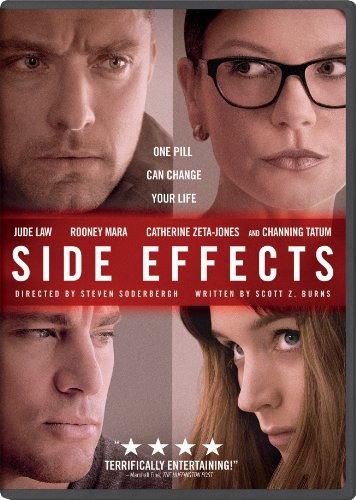 Side Effects Amazon Price: $29.98 $4.99 Buy Now(price as of Apr 9, 2016)
Side Effects, a thriller with a twist starring Jude Law as psychiatrist Jonathan Banks and Rooney Mara as Emily, the patient he tries to help.
Next >> Movie Review: The Girl on the Train