Find the X-Men movies on Amazon. You too can earn money from writing articles by signing up for InfoBarrel.
InfoBarrel is a writing platform for non-fiction, reference-based, informative content. Opinions expressed by InfoBarrel writers are their own.
InfoBarrel > Entertainment > Film > Movies

Certificate 12A, 144 minutesDirector: Bryan SingerStars: James McAvoy, Michael Fassbender, Jennifer LawrenceX-Men: Apocalypse opens a long time in the past, in the Nile Valley in Egypt 3,600 years Before Common Era. A procession is being led down a street into and underneath a pyramid, as various people look on. Some of the, armed, onlookers do not look that happy, giving an idea as to what is going to come. There are five primary people in the procession, the god/pharaoh En Sabah Nur (Berdj Garabedian) who is being carried in a boat in ceremonial dress, resembling one of the Egyptian gods, and his four primary servants, the Four Horsemen, who would all appear to possess powers and are also wearing godlike ceremonial dress. En Sabah Nur is very aged, and is going to put his consciousness into the body of another mutant (Oscar Isaac, Drive, Ex Machina, Star Wars: The Force Awakens), one with superhuman healing powers, in a process that involves glowing patterns that look rather reminiscent of circuit boards, although very large ones. This is a process he has done many times in the past, but this latest transference will mean that he will never die, as when he does this with another mutant, he takes, and keeps, their powers.En Sabah Nur is considered to be a false god by the people, and when the transference process has begun those who object to him attack his loyal followers. The four servants defend the pharaoh with their lives, allowing the process to be completed and him protected, but the pyramid is destroyed and collapses on Nur, burying him beneath the ground, and the pyramid's golden capstone, but not until the transference is fully complete and he has been armoured by his last surviving servant. He does not wake up at this time, but remains buried beneath the ground, asleep. 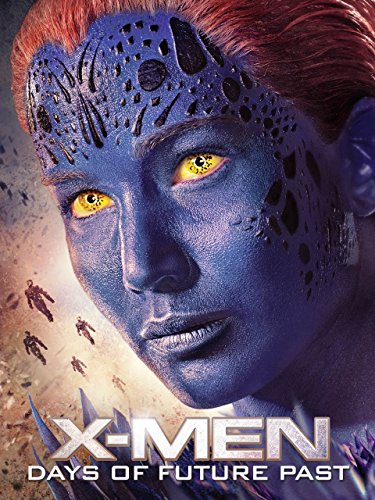 In Ohio in 1983, ten years after the events of Days of Future Past, a young Scott Summers/Cyclops (Tye Sheridan, Scouts Guide to the Zombie Apocalypse) is having problems with his eyes, which eventually results in uncontrollable beams being emitted from them when they are open. His older brother (although in the comic books, actually his younger brother), Alex/Havok (Lucas Till), takes him to Charles Xavier's School for Gifted Youngsters.In East Berlin, a winged mutant, Warren Worthington III/Angel (Ben Hardy) is being forced to fight other mutants, in cage fights, and is proving quite good at it. His latest opponent is the teleporter Kurt Wagner/Nightcrawler (Kodi Smit-McPhee, ParaNorman), but events are disrupted by Raven/Mystique (Jennifer Lawrence) - considered a hero for stopping Magneto - who rescues Nightcrawler and is going to send him to away.

Credit: https://upload.wikimedia.org/wikipedia/en/0/04/X-Men_-_Apocalypse.jpgIn Poland, Erik Lehnsherr/Magneto (Michael Fassbender) is in hiding, living with a wife and child, trying to put past events behind him although the entire world is still looking for him. Given that Magneto is quite a tragic figure, it can be guessed that things are not going to go well for him. When they don't,  Peter Maximoff/Quicksilver (Evan Peters) decides to go to Xavier's school to get help in finding Magneto.In Egypt, CIA Special Agent Moira Mctaggert (Rose Byrne, Bad Neighbours, Bad Neighbours 2, The Internship), whose memory of the events of X-Men: First Class was removed by Charles Xavier (James McAvoy), who  is investigating a cult which is trying to bring back En Sabah Nur, who is believed to have been the world's first mutant. She finds them underground, where they have discovered the capstone of his pyramid, beneath which he is buried. They are successful in awakening the pharaoh, also known as Apocalypse, and the entire world notices his awakening. At Xavier's school, there are no X-Men currently, although Hank McCoy/Beast (Nicholas Hoult, Jack the Giant Slayer, Mad Max: Fury Road, Warm Bodies) thinks they are still needed. Professor Xavier just wants to teach. The telepathic and telekinetic young mutant, Jean Grey (Sophie Turner), has a nightmare when Apocalypse is awakened, one in which the world perishes in fire. Is this a dream of what Apocalypse is going to do, or is it a dream of Phoenix?Apocalypse starts recruiting four mutants to serve as his new horsemen; in Egypt, he finds the street thief, Ororo Munroe/Storm (Alexandra Shipp) and in Berlin he finds Angel and Psylocke (Olivia Munn, Ride Along 2). His final horseman is the emotionally wounded Magneto. With them, he plans to wipe the world clean. His initial efforts result in Xavier being captured by him, and several other mutants being capture by now-colonel William Stryker (Josh Helman) and taken to a secret facility. Fortunately for them, the facility, although not directly mentioned by name, is probably Alkali Lake, and Weapon X is accidentally released. With massive lost of life. Without Xavier, and with only a couple of experienced people, the young students are going to have to go up against the most powerful mutant in history, and his Four Horsemen, one of whom is now slouch himself in power terms.The film is available in both 2D and 3D, with the 3D version being the one watched. Although this is a live action film, it is one that makes extensive use of the right type of special effects so, in general, there is a benefit seen from the 3D, although not in every scene, but definitely in the epic battle.What this film was going to be about was hinted at in the post-credits scene of X-Men: Days of Future Past, at least to those who could recognise it, as an individual with blue-grey skin is glimpsed watching a pyramid assemble itself, presumably by the use of telekinesis, as four people on horseback watch in the background. Of course, it was more than hinted at when the title of the film was revealed.Hugh Jackman is now the only person to have appeared in all eight X-Men films (if Deadpool is excluded), albeit for a very brief cameo in First Class and for another cameo, although an extended one, in this film. Although characters such as Magneto and Professor X have appeared in every film, they have not always been played by the same actor - the earlier films, apart from the past/future Days of Future Past which had both, have had younger actors portray them as their younger versions. Charles Xavier finally loses his hair in this film; he was really odd with a full head of hair not his trademark bald head.There is quite a bit of violence, some of it bloody in nature (Wolverine is not exactly a reserved character when it comes to expressing his anger) but most of the true bloodshed happens off-screen, rather than on, otherwise the certification would be higher. There are some elements of humour, but overall the film is not a humorous one. With it being set back at the beginning of the 80s, it's also interesting to see old television shows and films, and posters for such, that have been added to the background of scenes. This may be quite a long film but it doesn't seem as long as it is, which is always a good sign, and the climactic, and quite extended, final confrontation is epic in nature. There are some flaws, but the film moves along at a brisk pace, keeping you involved, so you don't really have time to notice them. There is a post-credit scene that would appear to be related to the next Wolverine film and, like the post-credit scene of the previous film, has a glimpse of a name that may be revealing.This is currently the last major X-Men film, although there are upcoming Wolverine and Deadpool films (and there may well be more in this series), so how does it do? Well, it's not quite as good as Days of Future Past was, but it's still a good film, and the difference is fairly minor. The climactic battle between all the mutants is epic in nature, and the various displays of power throughout the film are impressive. Apocalypse is the stereotypical bad guy - although he could be considered to be the first such from one point of view, which would make him the prototypical bad guy - and projects a suitable menacing appearance. No running around and threatening, just casual displays of ruthless power. X-Men: Apocalypse is great fun to watch, and brilliant to look at, and should definitely keep fans of the series enthralled. 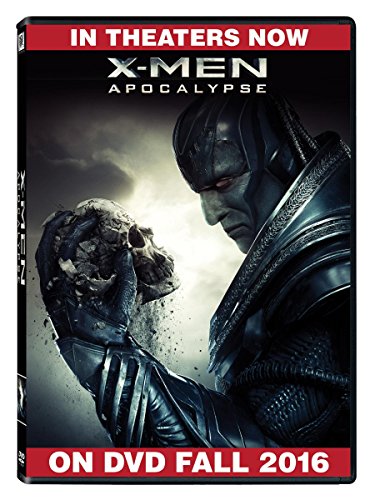