My Writing Progress Report for September 2016

Credit: MorguefileThe total number of words written in September was 30,885, down substantially from August.

AdSense earnings were £1.16, down quite a bit from the previous month. The majority of this was from the electronics site, but there was some from the general site and some spread across all of them. AdSense income as a whole, including YouTube revenue, was also down.InfoBarrel earnings - well, who knows what these actually are, they still don't appear to be accurate (more so this month) and there has still been no update from admin, months after the fact. Tier 1 earnings for September were supposedly $13.92, which is pathetic and there are no Tier 2 earnings at all, even though the income has supposedly been "finalised." The September competition hasn't been updated either. Considering that the site's owners supposedly still care about it, they are doing an incredibly good impression of not giving a damn.

Credit: MorguefileAmazon US had 12 items shipped earning $23.53, which was quite a drop in income from August but still the best income to date from the month of September. Some of the purchases were not shipped until October, so are not counted, and a couple of items were returned. The 6% referral threshold was reached again, which made a bit of a difference, but once again most of the sales were capped at 4%.Amazon UK earnings went up - to nothing. There were no sales during the month but as last month's earnings were negative due to a return, this actually meant an increase. 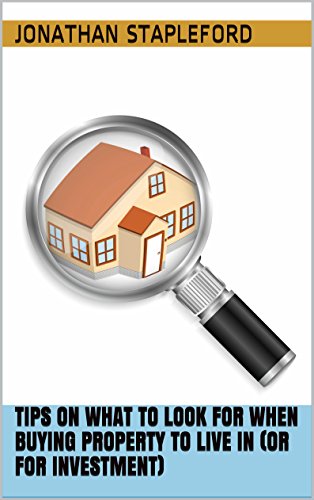 Tips on What to Look for When Buying Property to Live In (Or for Investment) Amazon Price: Buy Now(price as of Oct 31, 2016)

I published the four role playing game supplements mentioned earlier on RPGNow in September. There were 304 sales across 75 supplements (not quite every supplement getting a sale, but not that far off) earning $192.19 after RPGNow's cut. Even though it was substantially down from August's income, September was still the second best month to date. There were quite a few sales at the beginning of the month from the tail end of the site-wide Cthulhu Mythos Sale and my own Going Copper Sale. September also saw the largest single sale to date, of 50 supplements, which were all sold through the "Shop Now" link on the Facebook page - which I had only set up a couple of days before, after seeing it on another publisher's page. These sales also earned $2.18 in affiliate revenue.One of the supplements published this month was a Pay What You Want supplement, where purchasers can choose what price to pay, including nothing. Unsurprisingly, lots of people got it for free, as always happens with PWYW products (still, at least some of those are probably added to my mailing list, so they may prove valuable in the long run) but rather more surprisingly many purchasers thought it was worth $1.Once again, nothing new to report on the Kindle front.

Another month with no new posts published on the electronics site, with some small progress made towards writing new content. Again, the site earned the majority of the AdSense income and all of the Amazon revenue.I published six posts and four pages on the RPG site. There were no sales or affiliate earnings from the site during September.I finally started the overhaul of the clothing site, beginning with republishing 8 former Bubblews articles on it. I also published a couple of placeholder pages, which are just there to link to and from other pages currently, and will be expanded with content at a later date.I published 29 posts and the two articles mentioned earlier on the science fiction site. Once again, the site earned no income, but it is continuing to get social and search traffic.I didn't make any progress on the writing site during the month.

I made 36 posts on myLot and $1.95 earned as a result, down quite a bit. I wasn't as active on the site, but it's not one where it's really worth investing large amounts of time on. Instead, it's something to do in between doing other things as a break.

I published 53 blogs and 28 microblogs (the former were under 200 words, some under 100; the latter essential tweets in length at most) on bitLanders during the month.Although money is earned from bitLanders and it is possible to calculate this on a monthly basis, it is not truly possible to accurately count it until it is cashed out. Properly earning money requires getting work reviewed, and possibly promoted on the site, both of which require an investment of "gems" which have to be purchased, either from bitLanders earnings or using PayPal (although some are got back on successfully reviewed blogs, movies and galleries). So any earnings won't be counted until they are cashed out.

As I mentioned earlier, I published one article and republished a former Bubblews article on the general site. In September, it earned some AdSense revenue and another cent from Infolinks. The site still needs quite a bit of work doing to it.

I have three good quality role playing game supplements planned for release in October, one of which is, just, my longest and will also be my highest priced to date. It's actually long enough that I've been considering setting it up as a print on demand book as well. To do that properly would really require professional editing and proofreading, with preferably some custom artwork as well. All of which would cost too much, which would suggest using Kickstarter to get it done. Assuming I can think of rewards to give people for funding it. I don't quite have enough supplements finished to take me through to the end of the month, but finishing up enough won't be a problem. I also must get some work done on the Kindle ebook.