InfoBarrel is a writing platform for non-fiction, reference-based, informative content. Opinions expressed by InfoBarrel writers are their own.
InfoBarrel > Travel & Places > Places > Singapore

My favourite childhood thrill was going on a Ferris wheel. I would spend hours languishing by this contraption at the village fair until I got my chance to hop on it among the hundreds of children overcrowding the fair. It was an out-of-the-world experience for the little ones even if what turned the creaking wooden frame of the wheel was the bare might of a village elder.

Fast forward a near half-century later visiting the Lion City of Southeast Asia, as I set eyes upon the behemoth Singapore Flyer, those evergreen feelings resurfaced and overwhelmed me so, even as I wondered with childlike fascination if this was a Ferris Wheel or some wheel that rolled out of the heavens.

I could not but take a shot at it and re-live those moments even though I had long shunned those run-of-the-mill wheels at numerous fairgrounds, saving them for the young ones.

I took a quick caption at the welcoming entrance and made my way from ticketing through the ground structure and glass facade where I could see the gondolas arriving. My excitement was already heightened in anticipation of the ride.

From outside, the ground structure had also looked impressive and was built conveniently around the observation wheel for easy entry and exit.  I had walked around for a while to have

a good look at the surroundings earlier. Now I was making my way to the point of boarding and as I approached it, more gondolas were seen arriving in a graceful manner. I suppose the circumference of the wheel makes these cabins seem really slow coming in. I did wonder if the nets below were meant to catch someone falling off but that somehow didn't seem likely.

As I got near, the structure of the cabin impressed me as it was neatly laid out with

good viewing angle and a spacious outlay. It was a completely sealed off cylindrical piece with ample standing room and aged-people friendly as there were seats in the middle. It seemed like it could hold fifty people in there but there was probably a smaller number allowed in at a time for optimum viewing and so as not to completely obstruct those who were seated. Once you got in and the doors slid shut, it was awfully quiet as though to prepare you for the visual feast that was coming. Still, you were given headgear to hear a recording about the scenery if you wanted.  When we started moving from  the ground station,   I turned to look at what we were leaving behind and I could see what appeared like the structural mechanism of the observation wheel(which is another name for Ferris Wheel).            Everything seemed to be in large proportions.

We started moving up and we were airborne!               In a while there was some new bird-cage like construction by the sea visible. The wake left          by boats were elegantly drawn upon the water.

Everyone was engrossed in the scenery. For a while there I caught myself walking round and round in the cabin, my childhood feeling telling me I shouldn't miss any part of the view. Then my adult sense stood me still and I chanced upon a majestic bridge connecting the main island to some reclaimed land that had been developed extensively. What a great view, I revelled.

I soon realized of course that I did not have to keep going around since the wheel was already doing that and I would still catch every angle there was to see. Sure enough there was more to come. Lo and behold! There was the sea water again but this time it was glistening and sparkling from the sunlight splendidly reflected from the coastline. Another bridge...

The wheel swayed further and higher. For a moment I thought I'd disappear into the clouds.

And then, what's this...the famed casino, the city skyline(and some green patch in the water?) all in one. I couldn't get this view if I was dangling from a helicopter :

The green patch made itself known (again without me having to run around the cabin) in a moment's notice. Who in their right mind would build a soccer field in the water? Who was going to fetch the ball from the sea ? Anyway, that was not my concern, I guess.  It did look like a marine stadium, if I could call it that except I had only seen something similar having dolphins in San Diego, California. Quite a sight!

On occasion the Ferris Wheel did stay stationary and it felt good suspended in air up there securely especially if there happened to be a claustrophobic somewhere, but not that I noticed. We were now on the downturn and became closer  to our views. Seeing underneath the bridges was cool.  This was the last I could see outside the immediate vicinity of the ground station.

Finally we were down. And so was my rendezvous with Singapore's Ferris Wheel.  I wish you will go and see what I had seen, only more maybe. That brings to an end my story of this wheel and it's probably the last I shall feel...unless someone builds a bigger one! 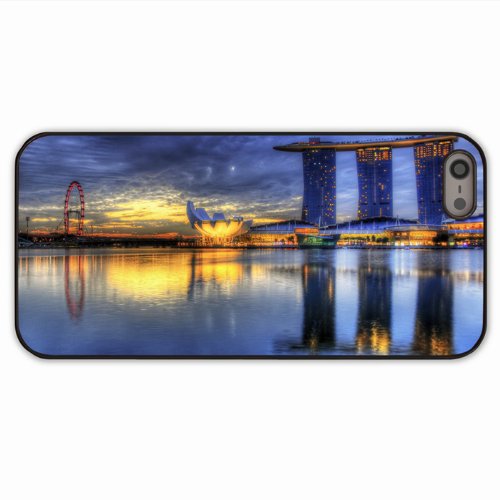