Zeno's paradoxes are one of those problems of philosophy that you instantly know to be counterintuitive but which somehow seem to make sense. Boiled down to their basics the paradoxes address the age old problem of motion and infinite regression. Attributed to Zeno of Elea, and preserved in Aristotle's Physics, the set of paradoxes were Zeno's attempt to support the idea of an unchanging universe. Despite the obvious refutation of direct observation the paradoxes remain surprisingly robust.

The nine surviving paradoxes suggest that motion is an illusion. They are a bulwark to Parmenides' belief that, "all is one," and, despite Aristotle having had a try at overturning them, three in particular offer a surprising degree of difficulty. Both subtle and profound they continue to challenge philosophers, mathematicians and physicists alike.

Achilles and the Tortoise .

"In a race, the quickest runner can never overtake the slowest, since the pursuer must first reach the point whence the pursued started, so that the slower must always hold a lead."

You don't need to be Usain Bolt to know that something is amiss with this description of reality, but, what's the problem? Zeno's reductio ad absurdum is sound in an infinitely divisible universe.

This description of motion requires an even greater stretch of the imagination since not only can a runner never overtake another runner, but, in this case, the runner can never even begin. What Zeno has put forward is a series of infinite regression that show motion is an illusion.

Why? Well, in order for the runner to reach the finish line he must first reach half way, but before reaching half way he must first reach half way of half way, and so on. If space is infinitely divisible then the runner never gets to leave the starting line. An infinite number of steps would take an infinite amount of time, and, sorry to say, the runner is running because he knows time is finite.

The Paradox of the Arrow in Flight.

"If everything when it occupies an equal space is at rest, and if that which is in locomotion is always occupying such a space at any moment, the flying arrow is therefore motionless." 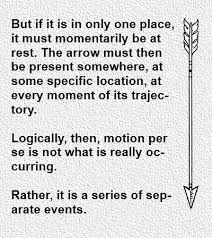 The arrow paradox suggests that motion is actually a succession of moments of stillness, much like a cinema projection. Each moment contains an arrow that occupies a particular place in space and time. As it occupies a single space it can be said to be motionless at that instant. It cannot move forwards, because no time has elapsed. Therefore, in every instant of time all things are motionless and as time is composed of moments motion is impossible. Time is a succession of moments of stillness.

Solving Zeno's paradox may involve little more than scrutinizing his descriptions. Proving his assertions wrong is probably easier than finding a way through the forests and thickets of his philosophical mind. Aristotle, Aquinas and Bertrand Russell have all offered refutations of his ideas by suggesting that he has misrepresented the reality of things. Hans Reichenbach, in more contemporary mode, has even dismissed the paradoxes from the view point of general relativity, arguing that Zeno's conceptions of space and time inaccurately describe what is actually the space-time continuum. However, the quantum Zeno effect, discovered in 1977 by a team of researchers at the University of Texas, seems to add credence to Zeno's ideas. In their experiments the team discovered that if an unstable particle is observed continuously it will never decay, a fact that seems to prove the arrow paradox. The Planck length however may be the final nail in the coffin of Zeno's paradox. The smallest possible distance in the universe the Planck length is a miniscule distance roughly equivalent to the radius 1015 electrons. Nature just doesn't get any smaller. Now any attempt to get smaller simply fails; which suggests that no matter how hard Zeno tries he would never be able to have an infinite regression. It may be a convoluted and highly technical solution but it works and very nearly eclipses the disproof offered thousands of years ago by Diogenes the Cynic; he simply stood up and walked away.

And so his theory is disproved.  Achilles beats the tortoise, rides off on a horse and gets hit in the foot by an arrow; just as the prophets had predicted. And no Classics scholar can argue with that.