After getting into the Star Wars novel series with Dark Disciple, my review of which you can read on Infobarrel, I decided to give Lords of the Sith a go. The main reason being the cover artwork which features Darth Vader and Emperor Palpatine, who are two of my favourite characters, looking particularly savage.

As usual before I give my thoughts on the book, please note there will be some broad discussion of the overall plot ahead. No spoilers though.

The story takes place after Star Wars Episode III: Revenge of the Sith, 14 years before the Battle of Yavin. Set mainly in the Ryloth system the story focuses on one of the first uprisings against the relatively newly formed Empire. In this environment Vader and the Emperor are stranded on the systems primary planet Ryloth and hunted by rebel Twi'leks and also dangerous local wildlife.

Darth Vader and Emperor Palpatine are already well fleshed out characters who’s personalities and motives are well explored through the film and cartoon series. This book, however, promises to delve even deeper into the personal relationship between these two characters, and for the most part delivers. It cleverly puts them in an environment where their tense master / pupil relationship, where both know that one must kill the other eventually, can be thoroughly tested. But although this is well played out I was unfortunately left wanting more. The book also focuses on the story’s of the Twi'lek rebels, and the planets Empire forces which takes the narrative away from what I felt to be the main characters. Therefore, I often found myself speed reading through the parts featuring the other factions in order to get back to what I perceived to be the main story. This is not to say that I didn’t enjoy the rebel storyline it’s just that given the title of the book I think the book should have focused more on these two Lords of the Sith.

This book does have more positive aspects than negative, however, as the overall narrative is well structured and exciting throughout. The book also has lots of little Easter eggs for the hardcore fan. It gives a glimpse of who’s behind the masks of the secretive Royal Guard and where their localities ultimately lie. The overall character of the Emperor is further enriched and the book explains why he does not use his full powers more often, which is a question I have often asked. On the rebel side there are family ties to the characters of the Rebels TV Series which cements this story as an important Rebel Alliance origin story. The exploration of Vader’s inner thoughts are also very gratifying acknowledging memories from the Clone Wars that tie in with the film series. This exploration of the man in the machine is very natural and helps explain his choices at the end of his story ark in Return of the Jedi.

All in all I really enjoyed this book, it’s easy to read and keeps you entertained throughout. It did feel slightly too long but I would say that’s just because of the multiple story arcs, not because it drags on in any particular area. The book also comes to a gratifying end for both dark and light side fans. It’s a great part of the series and has definitely made me want to read more of the books and especially ones by this author. 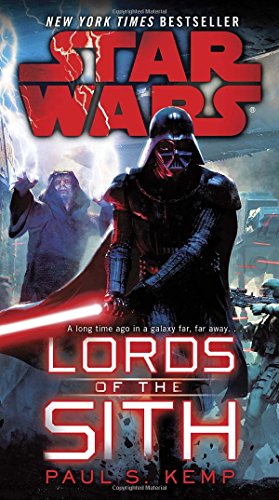