Stephen King's Different Seasons: A Look Back at a Classic

In the world of horror and suspense fiction writing, Stephen King is somewhat of a demigod. Since 1974 he has published 50 novels and almost 200 short stories, many of which have been made into movies. His memorable characters and fiendishly clever story lines have created lasting images that defined the genre, especially in the 70’s and 80’s. From killer dogs and killer clowns to teen-aged telekinetics and fire-wielding little girls, King set the bar for all things creepy.

However, King is known for his dramatic abilities as well. Nowhere is this more apparent than in his 1982 classic Different Seasons. This collection contains four tales that were written at different times, then brought together under the subtitles of each of the four seasons. Three of these four stories went on to become movies, one of which (The Shawshank Redemption) has continuously ranked in the top five of IMDB’s list of the greatest movies of all time.

Rita Hayworth and the Shawshank Redemption

It’s amazing that many people don’t even realize that Stephen King wrote this story. The plot for this tale is based on Leo Tolstoy’s God Sees the Truth, but Waits. It follows inmates Andy Dufresne, a former banker, and his friend Red. The story tells of Andy’s plot to escape from Shawshank, the prison in which he is serving time for allegedly killing his wife and her lover. As Red helps Andy acclimate himself to prison, Red grows to admire Andy’s character and the two become friends.

As some of the prison personnel (including the warden) begin to take advantage of Andy’s banking skills from the outside world, he uses the additional freedom and perks they give him to plan his escape. With the help of a rock hammer he acquires with Red’s help, Andy is able to execute his elaborate plan and free himself. Red is later granted parole after he had given up all hope and goes to meet Andy.

The film version stars Tim Robbins as Andy Dufresne and Morgan Freeman as Red. Released in 1994, it was nominated for 7 Academy Awards including Best Picture.

This second story in Different Seasons features a boy named Todd Bowden who suspects his German neighbor is a former Nazi officer named Kurt Dussander. After discovering this to be fact, he proceeds to blackmail Dussander into retelling his history and acting out in an effort to satisfy Todd’s morbid fascination with the Holocaust. Tension escalates between the two as they threaten to expose each other, which then leads to both of them committing random murders to ease their nightmares.

The two later reach an understanding after Dussander suffers a heart attack trying to dispose of one of his victims. Things take a turn for the worse when he is recognized by a Jewish man in the hospital. Soon things spiral irreversibly out of control for Todd as he hunkers down by the highway with his rifle and goes on a killing spree before he is taken down hours later.

Before there was the line, there was the story. Following four kids from households with varying levels of dysfunction, The Body describes the journey of Gordie, Teddy, Chris, and Vem in the 60's as they search for the body of a missing local boy. The story is told from the perspective of Gordie as an adult as he recants the events leading to the discovery of the body after negotiating various obstacles, including close encounters with trains, dogs, and bullies.

Once the authorities find the body, the story continues with the boys’ lives in the aftermath and their visions for the future. In the end, all of the boys except Gordie end up dying before becoming adults. Gordie ends up becoming a successful writer with a family.

The film, which was released in 1986, stars Corey Feldman (Teddy), River Phoenix (Chris), Jerry O’Connel (Vem), and Star Trek: The Next Generation’s Wil Wheaton as boy-aged Gordie. The adult version of Gordie is played by Richard Dreyfuss.

This particularly eerie tale involves David, a New York lawyer and member of an exclusive men’s club where the members gather to tell strange stories to each other for entertainment. On Christmas Eve, a club member named Dr. McCarron tells a story about one of his patients who is with child. Dr. McCarron teaches the woman a unique breathing method to help her through her pregnancy and childbirth.

When the time arrives and the woman goes into labor, the cab becomes involved in an automobile accident and she is decapitated. When McCarron gets to the scene, he finds that the patient’s body and mouth are still rhythmically breathing and the baby is unharmed. After delivering the baby, her head stays alive long enough to hear that the baby is a boy and thank the doctor before finally dying. The doctor says that he kept tabs on the boy through the subsequent years, and when he goes to finally meet him, he remarks to the club members that he had his mother’s determination and her hazel eyes.

These four stories represent King at his dramatic best as he uses well-honed story-telling techniques to transport the reader to each time period and the events within. If you are interested in reading similar works of his from this time, I would recommend the Four Past Midnight collection for which King won the Bram Stoker Award in 1990. My favorite among these stories is The Langoliers, a tale about a flight from Los Angeles to Boston where ten passengers wake up to find everyone else in the plane has disappeared. 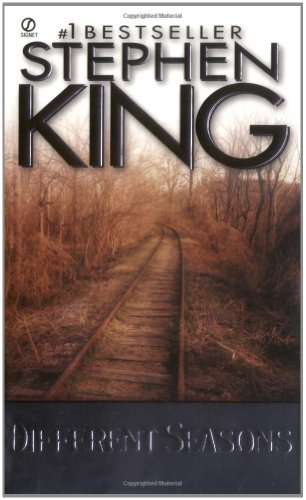