The Banking System (Your Master)

Ever wonder where the Government gets all the money they spend? The answer is the Federal Reserve Bank, or Fed. The Fed is responsible for regulating financial institutions, managing the nation’s money, and influencing the U.S. economy. They raise and lower interest rates and create money to stimulate the economy or slow inflation. This system manipulates macro goals by lowing unemployment rates, maintaining stable prices, and creating gross domestic product (GDP).

The War Against The Central Bank

Originally many of the founding fathers opposed the idea of a central bank due to their untrustworthy issues involving the Bank of England imposing high interest rates. King George III outlawed the interest free independent currency the colonies were producing themselves, forcing them to borrow money from the Bank of England on interest.

In 1907 a financial crisis, known as the panic of 1907, was created by J.P. Morgan. J.P. Morgan created rumors that prominent banks in New York were insolvent or bankrupt. This created mass hysteria and out of this panic began a run on the banks [People taking out money faster than the bank could pay it out]. They were in dire straights and needed liquidity so they had to call in their loans. This caused the recipient to have to sell their property, thus creating a spiral of bankruptcies and repossession. This crisis fueled the need for the Central Bank of the United States. Six years later the Federal reserve was born to make sure this would never happen again.

It wasn’t until 1913 when the Federal Reserve Act passed. The Fed controls the monetary policy set-up by the Federal Open Market Committee. This Committee is divided into 12 Districts.

Federal Reserve notes were later created by Congress to allow for a flexible supply of money. These notes were then traded to the Fed for currency that was distributed to banking institutions as needed by the public. Basically the Government prints an I owe you, note, and takes it over to the Fed. The Fed then says pass this law and we'll give you money. The Government agrees and that is how we get money!

From 1914 to 1919 the Fed substantially increased the money supply resulting in extensive loans to small banks and the public. Then in 1920 the Fed deliberately contracted credit in an extreme way, thus resulting in banks required to call in large amounts of loans and, just like in 1907, banks runs bankruptcy and systemic collapse occur. Numerous banks outside of the Federal Reserve System collapse, thus resulting in a monopoly.

From 1921 to 1929 the Fed increased the money supply. This resulted, yet again, in increased loans to the public and banks. There was also a new kind of loan that was created that allowed for an investor to put down only a fraction of the stocks value, the rest being loaned from the Broker. The catch to they loan was it could be called in at anytime and had to be paid in full within 24 hours. The typical result was the selling of the stock purchased with that loan. So a few months before October in 1929 Rockefeller, Burke, and other insiders quietly exited the market knowing the bubble created was about to burst. On October 24th 1929, the financiers who furnished the call loans started calling them in, in mass. This started a massive sell off in an already inflated market. This led to mass bankruptcies which allowed the large banks to buy up the now failed ones at discount. It didn’t stop there. Instead of expanding the money supply to recover from this economic collapse, the fed actually contracted it - fueling one of the largest depressions in American history.

All money is created out of debt - money is monetized debt. Whether it is materialized out of treasury bonds, home loans contracts, or credit cards. In other words if all outstanding debt were to be repaid now, there would be no money in circulation.

Interest is charged on almost all loans made and the money needed to pay back this interest does not exist in the money supply outright. Only the principal is created by the loan and only the principal is in the money supply. So if all this debt were repaid right now, not only would there be not be one dollar left in circulation but there would be a substantial amount of money owed that could never be repaid.

The central bank does not simply issue money to the Government, it loans it to the with interest. Then through manipulation, increasing and decreasing the supply of money, the central bank essentially regulates the value of the currency issued. It is critical to understand that a system like this can ply produce one thing in the long run, debt.

If every dollar produced by the banks is loaned at interest, then every dollar is actually that dollar plus a certain percentage of debt. If the Central bank controls the monopoly on the currency and every dollar that is issued comes with X amount of debt, then where does the money to pay for the debt come from? Well, it can only come from the Banks again, thus the bank must temporarily increase the money supply to cover the debt created. Since that money is issued at interest as well, it just creates even more debt.

“And I sincerely believe… that banking establishments are more dangerous than standing armies; and that the principle of spending money to be paid by posterity, under the name of funding, is but swindling futurity on a large scale.” - Thomas Jefferson 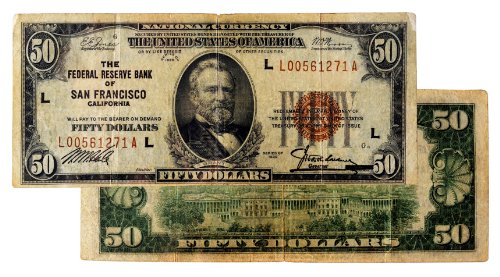