From the points of view of philosophy and history, the Egyptians viewed the world as just the valley in which they lived, that is to say a land that developed vertically from north to south; a land that rises from the waters, just as out of the waters of Nun, the primordial ocean, were born the Earth and the heavens. The other dominant element of the world that originated from water was the sun, the power of which was capable of baking the land and withering crops as well as bringing life, light and warmth.

Just as the waters of the Nile flowed Northwards from the South, the earliest inhabitants of Egypt saw the sun rise and set on a trajectory from East to West that intersected that of the river. Each evening the sun disappeared in thedistance to the West as if it had been swallowed by the sky, but during the night it was regenerated and appeared again the next day on the Eastern horizon. From the earliest times, the Egyptians used these simple natural observations to develop a vision of a world based on the terrestial North-South and celestial East-West axes which formed the foundation of their religious beliefs.

The Role of The River Nile

Curiously, as vital as the Nile was to their very existence, and despite the part it played in their vision of the world, the Egyptians never personified it as a god, instead associating with divinities not the river itself but rather its effects. Thus, they identified Hapi, a god associated with the concept of abundance, with the phenomenon of the Nile flood, and similarly, the energy of the waters that revitalised and fertilised the land was associated with the resurrection of Osiris. Hence the correlation between the cult of the dead, the concept of devine resurrection and the fertilisation of the land that was probably developed as early as the Predynastc Period (earlier than 3000BC).

The Egyptians believed that the Nile flowed from a cavern, fed by the underground ocean of Nun, itself composed of the waters from which the universe was created and on which the world floated. They thought that the great river flowed uninterruptedly towards the very waters that fed it and returned to the surface in an eternal and unbreakable cycle of regeneration. They also believed that the sun god Atum-Ra, creator of all things, rose out of the ocean Nun; the sun in turn created two deities - Tefnut, the damp air and Shu, the dry air - who in their turn created the god Geb (the Earth) and the goddess Nut (the sky). Out of the union of these last two came the gods Osiris, Isis, Seth and Nephthys. This conception of the world is a recurring depiction in many images in which Nut is shown as a naked woman, elongated and supported by the god Shu to prevent her from falling onto her consort Geb, depicted as a sleeping, naked man. Each evening, Nut swallowed the solar disc and gave birth to it once again in the morning; not surprisingly her body was often depicted as being covered in stars.

The Egyptians' religious beliefs were very complex and their religion was populated by a multitude of different deities. In general, it may be said that Ancient Egyptian culture in its entirety was bound by religion; society itself was structured saccording to a rigid hierarchy, from the gods to the pharaoh through to the people subdivided by classes. The gods personified the forces of nature, supervising every event and every activity; they were responsible for the destiny of the country and every inhabitant of it. The cults of the various gods were the responsibility of the Pharaoh and the priests who provided for the terrestial needs of each deity and the care of the material images according to extremely complex rituals. The people instead worshipped their gods in small shrines constructed in the villages and the countryside. Moreover, each region, district and settlement had its own gods and its own myths which were accepted with absolute tolerance by the official clergy.

The minor deities (actually the most important ones in terms of popular religion) manifested themselves in many forms and were often given different names from place to place: the Egyptologists have identified several thousand. The Egyptian people had a practical conception of religion and associated every natural occurance with a particular deity who might take the form of animals, plants or natural events: hence the appearance of many animals such as cats, crocodiles and bulls which quite often were mummified and placed in special necropolises after their deaths. Among the gods worshipped throughout Egypt were Osiris, the Lord of the Underworld portrayed in the form of a mummy with a bluish flesh tone, his wife Isis, a witch and a powerful goddess of life and regeneration, the jackal headed Anubis, the god of the necropolises and patron of mummification and Bes, depicted as a dwarf with monstrous features, the protector of pregnant women and god of the family.

If you want to learn more... 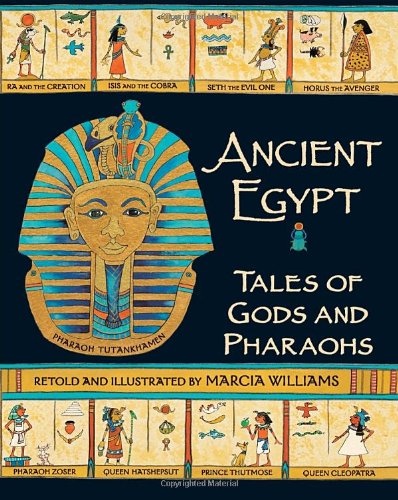