The Life and Times of the Physicist Albert Einstein

Albert Einstein was raised in Munich, Germany, where his Jewish family moved six weeks after he was born. Einstein came to the world on March 14, 1879 in Ulm, Württemberg, Germany. His father was an electrical engineer named Hermann Einstein. His mother was Pauline Koch. The family moved to Munich in 1880, where his father an uncle established a manufacturing facility for equipment that used direct current. Einstein grew up in an educated middle class family.

Einstein shared later on about his early fascination with a magnetic compass. He was around four or five years old at that time. The impression the device left with his was the idea of the existence of an invisible force. When Albert was 10 or 11 years old when he revealed an extraordinary curiosity towards the sciences.

He also had musical inclinations and took lessons. Albert learned to play the violin and the piano when he was young, and this fueled his interest in classical music, which he took to adulthood. He was a thoughtful and exacting child. According to his sister, he would exercise grave concentration and perseverance even when just building a house of cards as a child. It was also said that he was a slow talker who carefully considered his words before saying them aloud. His siblings also described the young Albert as a self-sufficient young person.

Albert’s first went to a Catholic school, and then transferred to the Luitpold Gymnasium in Munich. His family moved again later on to Italy where he spent parts of his childhood in Milan and Pavia. When they moved again, this time to Switzerland, Albert was enrolled first at Aarau and then afterwards at the Swiss Federal Polytechnic School in Zurich in 1895, where he graduated with a bachelor degree in 1901. He obtained top grades in mathematics and physics when he took the Swiss Matura in 1896. There, he underwent basic training for teaching mathematics and physics, but he was unlucky in finding a position that fits his teaching qualifications. He applied for a position in the Swiss Patent Office in Bern was he started working as a technical assistant.

Einstein became a Swiss citizen in 1901, soon after he was awarded a college diploma. He pursued higher education while working at the Patent Office and in 1905; he completed his Ph.D. from the University of Zurich.

Einstein’s biographers assign the year 1905 as his Annus Mirabilis, or his “miracle year.” In 1905, the year he attained his doctoral degree, Albert Einstein published four theoretical papers—his seminal work. These papers had a great influence on modern physics. The young theoretical physicist wrote the papers in his spare time. His famous equation on the nature of energy, "E= mc2" came from the Special Theory of Relativity, which changed our understanding of the physical Universe.

The Special Theory of Relativity was discussed in his fourth published work. The main argument of special relativity is that space and time are relative to the motion of the observer, instead of being absolute. At great speeds, two observers would disagree about measurements of space and the timing of events. At the core of the theory is the constancy of the speed of light in all frames of reference. A detailed calculation of the equation, E=mc2 was presented in the fifth paper that Einstein completed.

Einstein’s inquiries into the nature of the Universe started when he came upon the realization that Newtonian mechanics had real inadequacies. He sought to fill in the gaps and find a means to reconcile the laws of electromagnetism and the laws of mechanics. He worked on problems relevant to the merging of quantum theory and classical mechanics, focusing on the Brownian movement of molecules and the thermal properties of light. His theories expanded upon Newtonian mechanics, but also refuted some of the postulates that have been accepted in the scientific community since the 17th century.

With four published papers, Einstein changed the way that we understand the Universe. His science was revolutionary. He was ahead of his time. The scientific community embraced Einstein’s brilliance, but the public was not as quick in embracing his ideas.

Albert Einstein’s name became synonymous with genius soon after a group of British astronomers demonstrated the predictions of his theories to be accurate. The scientists took measurements during a total solar eclipse, which verified predictions culled from the General Theory of Relativity. Based on Einstein’s theory, the magnitude of the sun’s gravitational mass would cause warping of the space and time in its vicinity. The phenomenon is observable in the behavior of starlight that skirts the sun on the way to the Earth. The measurements made by the British team were in accordance with the predictions of the General Theory of Relativity. In later years, the shift in the orbit of Mercury, which was predicted by Einstein’s General Relativity, was also confirmed. Another confirmation was made when astronomers discovered that black holes exist.

Albert Einstein was awarded the Nobel Prize in Physics in 1921 for his “services to theoretical physics. The Nobel Prize was given in recognition for his work entitled, “On a Heuristic Viewpoint Concerning the Production and Transformation of Light,” where he discussed the results of his examination of the photoelectric effect. In this paper, he theorized that quanta of light behave like a wave while exhibiting particle-like properties. His findings served as an important foundation of quantum physics.

Einstein’s was a brilliant theorist, but he was also endowed with a character that allowed him to make good use of his intellect. His determination and clarity of thought helped him in realizing his goals. He was devoted to solving the problems in physics that beset his time. He strategized and even visualized the steps that he needs to take in order to move forward. He was also pragmatic enough to acknowledge that his contributions and achievements are just stepping-stones towards attaining a higher level of knowledge.

Positions Held in the Academe

In 1916, he published the completed General Theory of Relativity, which dealt with gravitation. Earlier, Einstein realized the necessity of furnishing a theory of gravitation in order to support the interpretations posited by the Special Theory of Relativity. In 1920, Einstein focused on the foundations of the unified field theories while continuing his exploration of pertinent topics in quantum theory and relativistic cosmology.

Einstein enjoyed global fame because of his revolutionary ideas about space-time. He was awarded membership or fellowship privileges by numerous scientific academies from different countries. Universities in three continents awarded Albert Einstein honorary doctorate degrees not only in science but also in philosophy and medicine. In 1925, Einstein received the Copley Medal of the Royal Society of London. In 1935, he was awarded the Franklin Medal. In just a few years after he won the Nobel Prize in Physics, Einstein became a household name

In 1933, Einstein left Germany and renounced his citizenship due to political reasons. He was a popular and outspoken figure in the Zionist movement. He spoke against militarism. When the Nazis started dominating the political scene after the rise of Adolf Hitler, he decided to leave Europe for the United States of America.

In the United States, he took the position of Professor of Theoretical Physics at Princeton University in New Jersey, a position, which he held until 1945. At this time, Einstein worked on the unified field theory. He became a pioneering member of the prestigious Institute of Advanced Study and resided in New Jersey for the rest of his life. Einstein became a citizen of the United States in 1940.

In 1939, Albert Einstein and other scientists informed American President Franklin Delano Roosevelt about the efforts of Nazi Germany to build an atomic bomb. They feared that Germany would have sole possession of a weapon of mass destruction. The group that wrote the letter was concerned about the lack of action by the American government in atomic-weapons research. Soon after, the Americans embarked on the Manhattan Project in secret. The main objective of the project is to conduct research on the viability of producing an atomic bomb. Einstein was not a part of the Manhattan Project. He deplored the use of the atomic bomb against Japan, which lend to the end of World War II.

During the post-war era, Albert Einstein was an important part of the World Government Movement. Aside from his intellectual pursuits, he was also known for his devotion to spreading pacifism and social justice. He also campaigned against armed conflict and called for the regulation of the use of atomic weapons. When the new State of Israel was formed he was offered the position of President. Instead, he dedicated his efforts to working for the establishment of the Hebrew University of Jerusalem with Dr. Chaim Weizmann. Einstein also published non-scientific papers, including “About Zionism,” (1930), “Why War?” (1933), “My Philosophy,” (1934), and “Out of My Later Years,” (1950).

In his last scientific paper, which was published in 1950, his attempts at the unified field theory to explain subatomic phenomena, gravitation, and electromagnetism, were deemed a failure by the scientific community. Scientists that came after Einstein are making their own efforts at unifying these governing concepts, but no successful unification has been attained so far.

Albert Einstein found relaxation and joy in music a passion, which he started delving into in childhood. He continued to play musical instruments for his own enjoyment. As an adult, he played the violin at his home when he has time to relax. While he was living in New Jersey, he also enjoyed sailing at a nearby lake.

He was first married in 1903 to Milena Maric, whom he first met at the Swiss Polytechnic. The couple had two children, Hans Albert and Eduard. After the dissolution of his marriage to Maric, he re-married in 1919. This time, he chose a cousin to become his wife, Elsa Löwenthal. Einstein was widowed in 1936, when Elsa died from illness of the kidney and the heart.

Albert Einstein died on April 18, 1955 at Princeton, New Jersey. He suffered internal bleeding from a ruptured abdominal aneurysm. He was brought to Princeton Hospital, but he refused surgery. Einstein passed away the next morning. He was 76 years old.

Einstein’s equation, “E = mc2” or the mass-energy equivalence, when simplified signifies that mass in a form of energy. This equation was first presented in his Special Theory of Relativity. From the equation, a small amount of mass holds a huge potential of energy when converted. One of the practical applications of this equation can be observed in nuclear reactors, where small amounts of mass are converted into phenomenal amounts of energy. Conversely, huge amounts of energy can be used to create mass, in the form of a new particle. 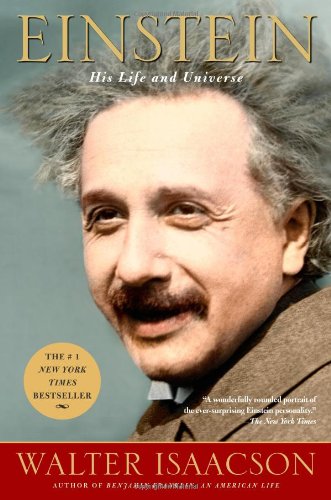 Einstein: His Life and Universe Amazon Price: $19.99 $7.39 Buy Now(price as of Dec 17, 2015)
This is a good book. I read it a few years ago and enjoyed the read.
Next >> Fashioning a Reign: 90 Years of Style from the Queen's Wardrobe - Magnificent Exhibition at Buckingham Palace