South America consists of twelve independent countries and an overseas region of France. It is a fascinating continent with a great wealth of historical sites and an array of unique animals and birds not widely known to other countries. Most of the South American countries have state animals and/or birds.

Andean CondorThe Andean condor (Vultur gryphus) is a popular choice as a national bird and has been chosen by Bolivia, Chile, Colombia, Ecuador, Peru and Argentina. It plays an important part in the folklore and mythology of the Andean regions. Like the moose, okapi and giraffe, it is a monotypic species. It is mainly found up to 5,000 metres in relatively open, non-forested areas.

Because vultures often have their head and neck in the carcase of an animal, these parts are devoid of feathers. This minimises picking up infections. The head and neck can flush red in response to the emotional state of the bird. Males have a ‘wattle’ of loose skin on the neck and a large, dark red comb or caruncle on the crown.

Another defence against infection, strange as it may seem, is defecating down the legs. This causes a build up of uric acid and helps kill bacteria. The Andean condor is large and black. The male is larger than the female which is unusual for the species. It has a greater wingspan than the California condor (8.9 to 10.5 feet) and is heavier with males weighing 24 to 33 pounds.

A ruff of white feathers almost meets round the base of the neck. The condor has difficulty lifting its bulk into the air and prefers to roost high up so it is easier to launch itself into the air. Once in the air, they float on the thermals. Condors can live for a century in captivity.

CougarThe cougar (Puma concolor) is the national animal of Argentina. It is a very capable predator and is found in every major habitat type in America. Depending on the region, it may be called a mountain lion, puma or mountain cat.

It is more related to the domestic cat than to true lions. It has a ‘stalk and ambush’ approach to hunting and preys on a large range of ungulates.

JaguarGuyana and Brazil have both nominated the jaguar as their national animal. The jaguar is a keystone species meaning it has an important influence on the ecosystem of its range and its extirpation would result in a highly changed environment.

It is also regarded as an ‘umbrella’ species so, if the jaguar is protected, other species come under its ‘umbrella’ of habitat and home range protection. The bite of the jaguar is inferior only to that of the spotted hyena. It feeds on over 80 different species of prey.

VicunaThe national animal of Peru is the vicuna (Vicugna vicugna), a member of the Camelidae family. The fine wool of the vicuna is very valuable, especially as the animals can only be shorn every two to three years.

They inhabit the Andes between 3,200 and 4,800 metres. It is around 3 feet tall at the shoulder with a small, wedge-shaped head, skinny neck and legs and small ears. As it lives in the rarefied air of the upper Andes, it has a heart nearly 50% larger than animals of a similar weight. A unique feature of the vicuna is the fact that the incisors grow constantly and have enamel on one side only.

HuemulThe national animal of Chile is the huemul, one of two endangered deer species of the Andes. During the summer they live at high altitudes, coming down to the sheltered forest valleys in winter. It is of medium size with a stocky, thick body and short legs.

They have a hunched appearance. The coarse coat provides good protection against cold and moisture. The double coat has 5 to 7 cm long guard hairs in winter. The introduced red deer competes with the huemul for grazing and this has pushed the animal to marginal areas. Its only natural predator is the cougar.

AlpacaThe alpaca is the national animal of Bolivia. It is related to the vicuna and is bred for their fibre which knits or weaves up into beautifully warm garments and textiles. Alpacas have been domesticated for thousands of years and there are now no wild alpacas.

Although related to the llama, they are too small to be used as pack animals. They are bred only for their meat and fibre. Such is the value of their fleece that smuggling and poaching is a problem. Alpacas use dung piles. This behaviour possibly limits parasitic infestation. Females are ‘induced ovulators’ meaning that the act of mating will bring on ovulation.

Rufous-Bellied ThrushThe national bird of Brazil is the rufous bellied thrush (Turdus reficentris). There are 12 species of thrush of slightly different colouring. The rufous-bellied thrush migrates north to the tropics during winter.

When the weather in the temperate zone of Southern Brazil begins to warm up, the bird returns. They are found in treed habitats in both urban and rural areas and may be solitary or travel with a mate. Its main food is coconuts, oranges, papayas and insects. It has a lifespan of 25 to 30 years.

HoatzinThe national bird of Guyana is the hoatzin or ‘stink bird’. This unusual creature has a bizarre appearance with a spiky crest, flamboyant plumage and a most unpleasant odour.

The hoatzin has a compartmented stomach like a cow with the contents fermenting and being broken down by bacteria, creating a most unpleasant smell.

Pampas fox (Lycalopex gymnocercus)The pampas fox and the bare-throated bellbird are the national fauna symbols of Paraguay. The fox prefers open habitats and grass plains. The fur is mostly grey with a reddish tinge over the head and neck.

There is a black dorsal stripe down the backbone. The tail is long and bushy and a black mark on the muzzle. The inner ears are white and the underparts lighter in colour than the rest of the body. They have a black spot on the lower hind leg.

Bare-Throated BellbirdThe bare-throated bellbird (Procnias nudicollis) is found in Argentina, Brazil and Paraguay. It is the national bird of the latter. It is found in subtropical or tropical lowland forests or tropical moist montane forests.

The male is shiny white with a bare but turquoise blue throat. Females and juveniles are light or olive green with a black head. The ‘bellbird’ part of the name comes from the sharp cry of the male when it is trying to attract a mate. The sound is like that of a hammer hitting an anvil or bell.

Andean Cock of the RockThe Andean cock of the rock is a medium-sized passerine (perching) bird native to Andean cloud forests. It is the designated national bird of Peru.

The sexes are different in colouring with the males having a large disk-like crest and scarlet or brilliant orange plumage. The tail and wings are black and the shoulders grey. It stays mostly at elevations of 500 to 2,400 metres. It is shy and inconspicuous and not easily spotted. The diet is mostly fruit and insects and they have been recorded as following army ants. The female is a much drabber brown.

Oven birds get their name from the elaborate, clay, oven-like nests that they build. There are four subspecies. It is a large bird with a square tail and reddish brown feathering with a dull brown crown and whitish throat. They forage on the forest floor and are often seen near human habitation.

TroupialThe troupial (Icterus icterus) is Venezuela’s national bird. There are over 25 species of these ‘New World Orioles’. They are fairly large with a long tail. The bill is bulky.

The plumage on the front of the neck and upper breast stick outward and form a visual ‘break’ between the black of the head and upper breast and the orange of the lower breast and underparts. The body is orange with black shoulders and black wings except for a white streak along the wings. The yellow eyes have a bright blue naked eye-ring.

National symbols are indicative of a region and South America's choices of representative fauna are truly unique. 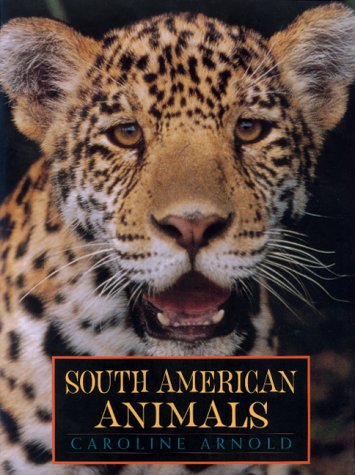 South American Animals Amazon Price: $43.42 Buy Now(price as of Mar 29, 2016)
South America has an incredible diversity of wildlife. Learn more about the most fascinating of these in this informative volume.
Next >> Zika: The Warnings About Wolbachia and Culex Our Health Authorities are Ignoring