It is hard to create a good villain. Some of the best ones have plausibility behind their evilness, and the great villains are the ones that can make their audience feel sympathy for them even while doing truly horrible things. While many video game villains dwell in the realms of transparent motives and one dimensional personalities, there are games that showcase villains of quite some depth, even though it may not be immediately recognizable.

It may take a few playthrough to get it, it may take gamers venturing into the accompanying book series for the game, but there are some truly misunderstood and misguided villains out there that are as much the victim as the protagonist is.

Most modern gamers were just wee nippers when they played their first Mario game, so we were unlikely to focus on the political situation in the Mushroom Kingdom. However, we are older now, wiser in some cases, and we've realized that Mario is kind of a dick.

When we are introduced to the Mushroom Kingdom, it is ruled by a monarchy that strictly enforces a class system and Bowser is depicted as some crazed insurgent that is trying to oust control by force. Certainly his occasionally violent means are nothing Ghandi would approve of, but what if Bowser is just a king fighting for his kingdom? His official title is, after all, King Bowser and Peach is but a Princess. So is it not possible this was his kingdom from the get? The evidence mounts further when you notice that his subjects, the Goombas, far outnumber the Mushrooms and other political affiliates of Peach in the Mushroom Kingdom, suggesting that Peach is, in fact, a usurper who subjugated the true citizens of the land.

The Fireflies -The Last of Us

Throughout The Last of Us, the Fireflies are depicted as a mysterious rogue organization at best and a malicious terrorist cell at worst. However, after struggling throughout the whole game to find them, you realize they are - like you would expect - normal people trying to survive. In fact, they are working to make the world better by trying to find a cure when everyone else has given up. Joel brought them the crucial ingredient for this cure, but when it came down to it, when they told him they would have to kill Ellie to get it, Joel went on a murdering spree and doomed humanity to what could be their ultimate end.

This is one great example on how victors decide how history is recorded. You are meant to see Joel as the hero. He saves the life of that spunky little girl who filled the daughter-shaped hole in Joel's heart, and you want to root for him, but he just sacrificed the many for the one. The Fireflies were willing to kill her, even if they wasted their one immune subject, to make progress towards saving the many. So...They are actually the heroes of The Last of Us, right?

While the Master Hand of Super Smash Bros. isn't outwardly evil or nefarious in any way, his status as final boss does suggest that he is the main villain of the game. However, seeing as at the start of the game he was shown to bring life to each character that was otherwise just a lifeless toy, he seems like a pretty okay guy, hand, thing.

Of course, his gift of life was pretty much thrown in his face as each of his creations began to fight with each other until the strongest challenged him to a showdown. At the end, Master Hand is beaten to a pulp and dies - in a horrible fiery explosion.

What did he do to deserve such a fate? Was living so horrible that his creations wanted their vengeance? Are all living things fated to fight for supremacy and ultimately attempt to kill their creator? Is Super Smash Bros. just a compacted timeline of human history?

It is really hard to feel sorry for Seymour, particularly when he just won't stay dead and you have to fight four increasingly powerful incarnations, but really focusing on his back story makes him at least a little pitiable.

Born to a human woman and Guado leader, both mother and child were ostracized among both races. In an attempt to have the world look favorably on her son, she decided they would make the pilgrimage to Zanarkand where he would defeat Sin and be remembered as a hero. However, Seymour was traumatized when his mother sacrificed herself to become an Aeon and gave up his pilgrimage. This trauma twisted in his mind until the only way he could see to end the suffering of the world was by becoming Sin and killing everyone, ending the spiral of death in Spira.

It is kind of a demented logic, but logic none-the-less. Seymour was never depicted as resenting the racism of the world around him, nor did his mixed blood status seem to keep him down. So were his motives out of sheer hate? Unlikely. Perhaps, deep down, he truly did care for the plight of his people.

Throughout the Mass Effect series, you learn quite a bit about The Reapers. Mostly that they are bad and you have to destroy them, but like many villains, The Reapers serve as a way to protect something precious.

Whenever organics advance enough, The Reapers come to completely destroy advanced civilizations. However, they don't do it for the sheer fun of it, they do it to protect organics from destroying themselves. As civilizations advance, organics will always eventually clash with synthetics, and that is a war they will never win. By cleansing advanced organics, it allows organic species to survive.

Essentially, The Reapers are the players that flip the Monopoly board and make organic evolution start all over again so it doesn't end with the whole Monopoly board on fire.

In Dragon Age: Origins players are never really given much of a chance to get to know Loghain. All we really know is that he betrayed a king, the Grey Wardens, and wrested control of Ferelden for himself. It seems pretty selfish at a glance. Unfortunately, the only way characters are given a chance to truly learn the back story behind Loghain is the in the Dragon Age novels, particularly The Stolen Throne.

The story in the novel focuses on the revolution where King Maric and Loghain freed Ferelden from the Orlesians. In it, you understand Loghain's hate of Orlais and watch him develop a strong relationship with King Maric. Through the trials and tribulations they are put through, you understand that Loghain suffered from an obsession throughout his life, an obsessive hate for Orlais.

It was King Maric that let the Grey Wardens return to Ferelden under the helm of Duncan, who was Orlesian. When King Cailan started to talk about calling in reinforcements from Orlais, it was the nail in his coffin. 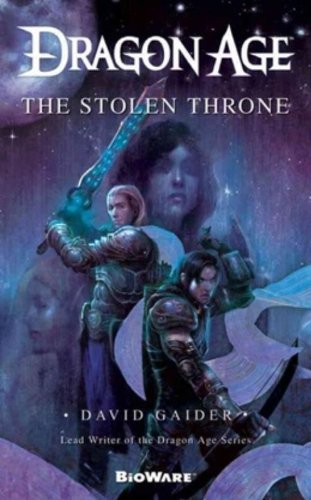 Dragon Age: The Stolen Throne Amazon Price: $9.99 $4.38 Buy Now(price as of Mar 9, 2016)
Loghain betrayed the blood of his best friend King Maric and a child who was born to the woman he loved in order to keep Ferelden free. It must have been painful to do so.
Next >> No Man's Sky - How to Efficiently Farm Money