Good Fortune to All!
InfoBarrel is a writing platform for non-fiction, reference-based, informative content. Opinions expressed by InfoBarrel writers are their own.
InfoBarrel > Home & Garden > Gardening & Yard Care

Onions have been an important flavoring from the beginnings of recorded history. The amount of onions used daily was recorded in information about the building of the great pyramids of Egypt.

The first chapter of Alliums: The Ornamental Onions, explores the history of onions in ancient, eastern and American cultures. Davies also describes some of the folklore surrounding this plant.

Chapter 2 discusses those Allium species commonly used as food: onions, garlic, leeks, and chives. The included recipes are surprising to find in a horticultural book.

A Unique Touch to Your Garden

Botanical Classification, the topic of chapter 3, was fascinating. Currently, Allium are placed in the Lily plant family although this is a controversial point by taxonomists. Pictures of various parts of the flower are included for the interested reader. They point out the wide variety of flowers found within this family. Davies made an important point about trying to determine where a plant species originated. He said:

Bulbs are a plant's way of circumventing the scorching droughts of summer. The winter rain or snow melting allows early growth of leaves and flowers. Fertilization achieved, the plant sets seed; then, duty done and immortality hopefully attained, the parent retires underground.

In general terms, the larger the bulb, the more reasonable to suppose that the species originated in an inhospitable desert climate. A big store cupboard will more profitably see the season through. P. 34

They Are Great to Cluster Together

I wish he had gone on to state if this statement can be applied to any plant growing from a bulb. In Chapter 4, he discusses the geographical distribution of Alliums throughout much of the northern hemisphere. The reader is also introduced to some of the botanists responsible for discovering and naming various species within this plant genus. A detailed bibliography of scientific writings about Allium ends the chapter. 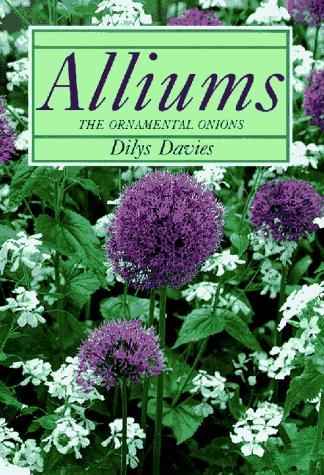 The next two chapters, Chapter 5 Cultivation and Chapter 6 Alliums in the Garden, provide all the information a potential grower of this plant species would need on cultivation, propagation and the use of the plants for different purposes. I appreciated his listing of plants to avoid because of their invasive tendencies. Many of the Allium sp. are useful in either fresh or dried flower arrangements. Some are even suitable for the scented garden and I don't mean with an onion or garlic type scent.

Over half the book is composed of a A-Z of selected Allium species (Chapter 7). This is a valuable reference and the most extensive one I have viewed. Davies lists the species followed by a specific meaning for its scientific name, the person who named the plant, and detailed information on the species including any synonyms that may be used. A sample of a typical plant description is given below.

Add Color and Fragrance to Your Garden

Coming from Iran, Turkey and the Caucasus (USSR), where it grows in dry stony slopes, at 1,500-3,000 m (4,500-9,000 ft.), this small plant requires a bulb frame or pot culture, with summer rest. A. Akaka is becoming available from specialist bulb nurseries, making it easier to obtain than some of the other attractive alliums from Iran, such as AA. Mirum, bucharicum or portensum.

The hemispherical umbel, 3-10 cm (1-4 ins) in diameter, carries numerous pale pink or whitish flowers with a central deeper vein, held on a stocky stem 8-30 cm (3 -12 ins) tall, The leaves are more opulent: glaucous and wide, up to 20 x 6 cm (8 x 2  ins), they resemble those of the better known as A. Karataviense or perhaps a Kaufmanniana Tulip. Page 65

I find these plant descriptions relatively easy to understand. For those unfamiliar with the descriptive terms, a glossary is included in the back of the book. This information provides me what I need to decide where to plant this particular species. I have found so many other books that neglect to be this specific, that it is a real joy to find it.

May I suggest you add some Allium sp. to your perennial garden? The pictures in this book will quickly convince you of their ornamental value. Because they are from bulbs, you needn't worry about replanting these every year.