Find the Man v. Food shows on Amazon, or try your own hot challenge with a range of hot sauces. You too can earn money from writing articles by signing up for InfoBarrel.
InfoBarrel is a writing platform for non-fiction, reference-based, informative content. Opinions expressed by InfoBarrel writers are their own.
InfoBarrel > Entertainment > Film > Television

Credit: http://en.wikipedia.org/wiki/Man_v._Food#mediaviewer/File:Man_v_Food_logo_square.pngThe series may be several years old now, but it is still possible to catch it on many channels in syndication.

What is Man v. Food?

Man v. Food was a television series originally shown by the Travel Channel in the United States, and has since been syndicated on other channels and in other countries, which ran for four seasons; the first three being the standard Man v. Food, each episode of which followed the same format, and the fourth and final season being Man v. Food Nation.

Credit: https://www.flickr.com/photos/jmazzola1/ Joe MazzolaThe series was hosted by Adam Richman, who although he clearly enjoys his food as he is not exactly svelte, was not really that big when the series was filmed. In each episode Richman would travel to a different city in the United States, where he would go to various eateries of different types selling different foods - most, if not all, of which appeared to be independent and often family run - and sample some of their signature dishes, which would involve a look at the preparation of the food in the places' kitchens, speaking to the staff and owners and talking about the food. These episodes would then finish with a food challenge.Man v. Food Nation followed a similar format with Richman travelling to a different city in each episode and trying different foods only, at the end of the episode, instead of taking part in the challenge himself, Richman coached locally recruited members of the public on how to complete the challenges.As well as some one-off clip shows, there was a series of them called Man v. Food presents Carnivore Chronicles, which had clips from past episodes along with some unseen footage. These shows had, as can be guessed from the title, a strong meat bias - although the series already has a pretty strong bias towards meat anyway.

During the regular shows in the first three series, at the end of each show, Richman would do a food challenge at an eating place in the area he is currently in. In the final series, these challenges would instead be done by members of the public. The place chosen would have a certain food challenge, which often came with a "reward" for completing it, such as a commemorative t-shirt, certificate or photograph on the wall. These challenges seemed to fall into two categories - the Stupidly Hot and the Stupidly Large.

What is Competitive Eating?

Adam Richman at the beginning of the shows stated that he wasn't a competitive eater. Competitive eating is a "sport" in which the contestants try to consume a large quantity of food in as short a time as possible. Although some of the challenges that were participated in did have a time limit in which they had to be finished, this wasn't true of all of them.[1]

The stupidly hot challenges involve dishes that are of a regular size, or maybe even starter sized, but are really, really hot as measured on the Scoville scale - a scale designed to measure the spicy heat of dishes.[2] These usually incorporated chillies of various types, such as jalapeños, habeneros, ghost chillies, Naga Jolokia peppers and bird's eye chillies for example, some of which have Scoville values in the hundreds of thousands or over a million units. In comparison, a sauce such as the original Tabasco sauce comes in at 2,500 to 5,000 Scoville units, which should give some idea as to how hot these dishes can be. Some of these dishes required the chefs cooking them to wear protective gear, such as breathing apparatus, whilst cooking them, due to the potency of their fumes.Adam Richman in at least one case had to wear protective gloves to eat the food - the Four Horsemen Challenge at Chunky's Burgers & More in San Antonio, which had a burger with, amongst other toppings, sautéed jalapeño, serrano, and Naga Jolokia peppers and habanero chilli sauce.[3]

Ass Kickin' Super Spicy Pure Habenero Hot Sauce Containing 400,000-500,000 Scoville Units - 4 oz. Amazon Price: $7.95 Buy Now(price as of Jul 19, 2016)
Trying something stupidly hot is not that uncommon - a lot of people are willing to give it a try - but continuing with it, once the individual realises just how hot the food is substantially more uncommon, as most people would, at that point, consider it not worth continuing. Richman persevered as long as he could, and frequently managed to finish them - although paying the price for doing so, as some are so hot they are hazardous to the health.

These challenges involve enormous portions of food that are being served as "single" portions intended for one person to consume by themselves. These could be multiple courses of food, or simply one course that was simply enormous. The challenges sometimes had portions large enough to feed several people, or even an entire normal family for a week. One example was the Vaca Acostada Challenge at La Vaca Brava in Puerto Rico which was an 8-pound sirloin steak platter on a bed of lettuce, barbecue sauce and chips (French fries), which were all covered with a mushroom, bacon, onion, and chorizo gravy and then sprinkled with shredded cheese.[4] In comparison, many people would find a 5oz steak adequate, and maybe going up to a 16oz if they were really hungry. 16 oz is one pound, so the meat alone is eight times as much as what a normal person would eat at the most, and around 24 times the normal steak size for many.

There are two reasons for eating food. The first is sustenance, the nutrition needed to stay alive. The second is enjoyment. The challenges - of both types - defeat what would be considered the primary reason for eating for enjoyment; namely, the enjoyment of the food, as Richman rarely enjoyed the challenges by the end of them, even those in which the food was tasty, simply because of the sheer amount of food being served. The quantities were also appallingly wasteful on food, even if the challenge was completed.Richman on a number of occasions approached the challenges with a "strategy" such as eating multiple courses together - thereby destroying a lot of their taste - or eating chips (French fries) with ice cream to counteract the sweetness of the enormous dessert.Not only is it wasteful, it is also extremely unhealthy, and goes well beyond the need for sustenance. Even though Richman was exercising and doing other things to maintain his health before and after these challenges,[5] it was apparently not enough to maintain his health, as this has been stated to be one reason why he stopped doing the challenges himself.[6] It was rather obvious that some of the other customers did not even do that much when it came to the stupidly large challenges.Excluding the challenges, most, but not all, of the dishes covered in the programmes were at least reasonably human-sized, although some are definitely on the overly large side, making the first part quite enjoyable to watch, until the actual challenge was reached. The Carnivore Chronicles clip shows are the least disturbing (as long as you aren't a vegetarian) to watch as they don't have the challenges at the end, and most of the food is served in more normal sized portions.The stupidly large food challenges, and the entire concept of competitive eating, are a celebration of gluttony at its worst, and more than a little disturbing. 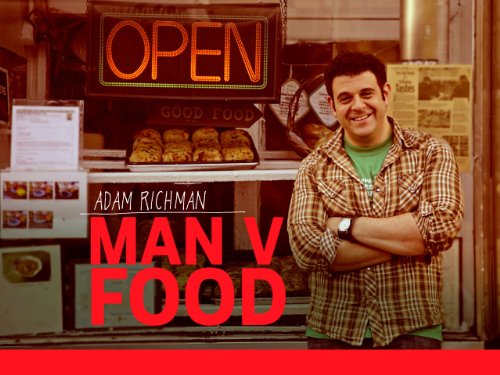