“Everything in life is writable about if you have the outgoing guts to do it, and the imagination to improvise. The worst enemy to creativity is self-doubt.” â€• Sylvia Plath, The Unabridged Journals of Sylvia Plath Be fearless. Start writing today for Infobarrel and make $$$ while you're at it.
InfoBarrel is a writing platform for non-fiction, reference-based, informative content. Opinions expressed by InfoBarrel writers are their own.
InfoBarrel > Travel & Places > Places > United Kingdom

A Dark and Stormy Night

It was a dark and stormy night, and the rain poured down onto the man as he traveled through the grassy fields, looking for shelter. The night was pitch black, and he could see nothing ahead, not even his own hands. Then, he looked up, and a flash of lightning cracked thunderously from the sky. It revealed…

A castle. The man inched a little closer to the dark, looming shape ahead. Should he keep traveling until he found his way home? Or should he knock upon its front doors and ask to stay for the night?

There are some places where you should never go into for your health’s sake. But if you do (and don’t say I didn’t warn you), enter at your own peril…

The mother of them all. Thought to inspire Bram Stoker’s Dracula, Bran Castle is nestled within the Carpathian Mountains in Romania. Located in Transylvania, it’s not difficult to see why people would associate the castle with vampires. The Gothic setting creates a luminous setting, where thin corridors and hidden rooms would be ideal settings for a vampire to await its prey. At the bottom of the castle, there is a small grotto, or chapel that holds Queen Marie of Romania’s heart. According to her final wishes, her heart was placed in a small golden casket and placed in a chapel, inside a marble sarcophagus.

As its namesake denotes, the castle was home to thousands of witch sentencings. Thousands of young women accused of being witches were tortured and killed in the dungeon chambers. One particular woman’s spirit tries to keep those who enter from leaving the castle.

Located on top of a craggy hill, this was once the setting for a tragic tale as old as time. Soleste and Moroello were young and in love. She was the daughter of the lord of the castle, and he was the captain of the knights. Moroello went off to battle, and Soleste believed him dead. Filled with sorrow, she threw herself off a balcony to her death. Moroello returned and found out what had happened, and then killed himself in turn. At night, it is said he roams the castle, looking for his long lost love.

What appears to be a dusty, old stone castle has a rich history behind it. A dark tale of family feud is enclosed within these walls, involving two brothers fighting for power. One was a priest, the other a warrior. As the priest held mass for his family members, his brother stormed in and plunged his sword deep into his heart, spilling his blood onto the grounds. The priest fell upon the altar and died from his wound. The room is now known as the “Bloody Chapel”. An oubliette was found in a secret hidden dungeon, with a mass of skeletons piled on top of the spikes. Unsuspecting visitors would fall through a trap door to their death upon the spikes. Most famously, it is said an Elemental haunts the grounds. The ghost has a sheep's body and human face with dark pools where the eyes should have been.

Situated just south of Edinburgh, this castle has had a long history, dating from the King Edward I’s stay as he was on his way to meet William Wallace. However, the haunting of this castle comes from the Lady Catherine of Dalhousie. The teenage lady was forbidden from meeting her lover, with whom she was madly in love. Upset, she locked herself in a corner of the castle and starved to death. She roams the castle, mourning her loss.

This castle will send chills right through your spine. Known as the most haunted castle in Britain, there have been numerous ghost sightings within these walls. The most famous of all is the “blue boy”, who haunted the Pink Room, according the owners. Guests supposedly saw blue flashes of light following a loud wail. His eerie sounds stopped supposedly after renovation, when the body of a man and boy were found inside a 10 foot thick wall, along with documents from the Spanish Armada. Many claim they still see and hear many strange things.

Dating from at least the 12th century, this castle has stood through numerous wars and battles. It was used to hold prisoners during numerous wars, who were subject to torture in the dungeons underground. During the plague in the middle ages, victims would be held in vaults until they succumbed to their deaths. With such a long history of war and imprisonment, there’s no doubt that the castle gives rise to sightings of spirits.

As one of the oldest secular buildings in Denmark, this castle has withstood wars and held numerous prisoners. The castle is home to a few ghosts. A grey lady who worked as a maiden haunts the grounds. A white lady, who was involved in a secret love affair of the son’s owners and murdered by his father, can still be seen. Most famously, James Hepburn, 4th Earl of Bothwell, was sent to the castle and held in appalling conditions until he was driven insane. The pillar he was chained to can still be seen, along with a circular groove in the floor where he supposedly spent the remaining decade of his life. He is seen riding through the castle grounds at night.

This castle was originally built by the Counts of Anjou in the 11th century and has been rebuilt a couple times through the centuries. The Duke of Brissac was given the property and money to rebuild the chateau in 1611, which has made it the tallest chateau in France. This castle’s haunting is a little different from other ones. The owner of the castle had a beautiful wife, who was completely indiscreet in her affairs. She would begin to have affairs that her husband could hear from the next room. Finally, he couldn’t take it anymore and murdered the woman and her lover. Unfortunately for him, it is said their moans can still be heard, should you choose to pay for an overnight stay.

The locals stay far, far away from this place. Built in the 13th century in a forest overlooking a steep rocky cliff, it was not built as a residence. Rather, it was build for a much more sinister reason – to keep evil creatures at bay. The castle was constructed over a large hole known as ‘The Gateway to Hell’, a hole so deep no one could see the bottom. Strange, otherworldly creatures were reported to crawl out of it. According to legend, a man sentenced to death was offered a pardon if he did one thing: he had to agree to be lowered by rope into the hole to report back on what he saw. The man readily agreed and was lowered down. Silence ensued, until thirty seconds later, a scream was heard. When the man was lifted up, his hair had gone white, and wrinkles had appeared all around his face. He soon went insane and died shortly afterward. Every prisoner sent down into the hole experienced the same result. 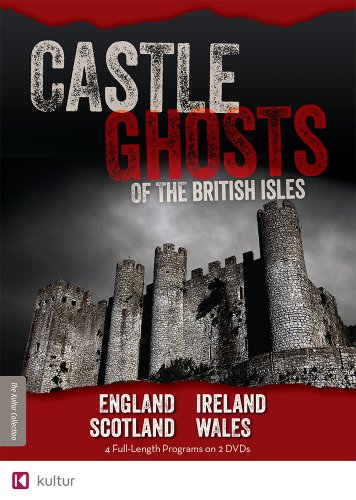 Castle Ghosts of the British Isles Amazon Price: $29.98 Buy Now(price as of Oct 8, 2016)
Next >> Undressed A Brief History of Underwear at Victoria and Albert Museum

5 Things to do in Cardiff