Kayaking is one the most entertaining summer activities. You always want to buy the best kayaks, since safety is by far the number one concern when it comes to kayaks and canoes. A good two person inflatable kayak is some of the more reliable, and safer ways to go canoeing on a lake, or down a river stream this summer. There are quite a few different kayaks available out on the market. Doing research is very important if you're brand new to kayaking, and not exactly sure what you'll need. Before you decide to buy a good quality two person inflatable kayak, you need to be well aware of what type of canoeing you'll be doing, and where. There are differently built canoes used for different types of water streams. Some are design for just light streams, where as others are built for bigger areas of water, and there are other kayaks meant to take on white water rapids. So make sure you're well advised in picking the very best inflatable kayak that is just right for you. The best thing about inflatable kayaks is that they're much more versatile, and adapt to take on different streams than most kayaks.

Tips to Picking the Right Kind of Kayak

There are three major types of kayaks, and they're built to do different things. If you're completely new to kayaking, then you should definitely pick a recreational kayak. Kayaking for beginners should be done on a small stream, ideally for fishing or for sight seeing. Recreation kayaking is generally very safe, and the best way to learn. Then there's sea kayaks, which are much bigger, longer, and used for touring, or padding in large lakes, rivers, or oceans even. It probably makes more sense to go with sea inflatable kayaks for bigger areas. There aren't too many inflatable sea kayaks out on the market. Inflatable kayaks are more practical to whitewater rafting, and recreational use for fishing, or sight seeing.Whitewater kayaks are design to withstand extremely fast currents, and can  withstand abuse from rocks and rapids. Their ability to bounce off rocks, and rapids make them useful for white water rafting. Two person kayaks are pretty practical, and not too long, making it easier to operate a whitewater kayak. There are two different types of whitewater kayaks: the playboat and the creekboat. The playboat isn't a down river canoe boat. It's more for highly train kayakers to perform tricks off rocks, and rapids in one particular area. The creekboat is for those who plan on going down river.

Having too many people in a kayak, ideally, is not a good idea unless its a sea or recreational canoe. Having two is perfect, and much more practical for white water kayaking. You never want to be involved in any type of white water kayaking alone especially. Some of those streams go awful fast, and it's better to have two extremely experienced paddlers. You'd like to have two people paddling for safety, and caution.

The advantages of buying inflatable kayaks is that they're very  light, and much easier to operate.  Most weigh no more than 50 pounds, making them portable to carry. Heavy hard shell kayaks can be harder to steer, especially for new beginners. It's not very hard to maneuver an inflatable kayak. Inflatable ones are much easier to set up as well. Most would assume the disadvantages compared to hard shell, or plastic is the durability. However, a really well made inflatable kayak can be just as tough, strong, and in fact they're much more durable. Especially for white water rafting. The best whitewater kayaks are inflatable. They bounce better off rocks since they feature trylon, and PVC. Bouyancy is probably the best part about buying two person inflatable kayaks. Inflatable boats float on their own. 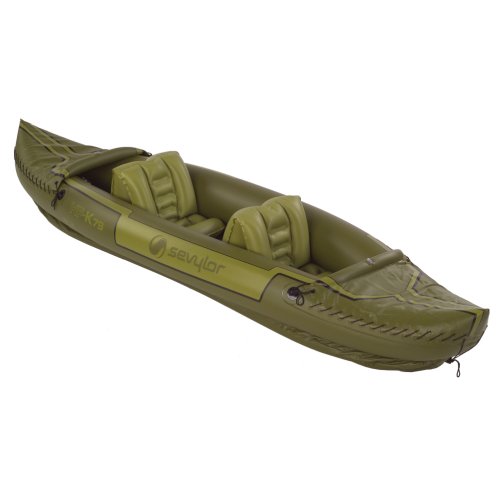 If you're whitewater kayaking, then definitely go with inflatable. They're by far the best and easiest to operate. Two person inflatable kayaks work fine as well for recreational use for streams, smaller lakes, and ponds. However, for sea kayaks I would go with something much heavier for bigger areas like lakes, and oceans. If you do buy a sea inflatable kayak, then definitely buy a Sea Eagle. They are some of the better inflatable canoes for the sea, and they're not too expensive to purchase online at amazon. On top two person inflatable kayaks are seen as the safest, and easiest to use. Sit on top kayaks are seen to be more comfortable, and popular. On top kayaks are better for fishers, since they're more convenient and easier to  move around in. However, for whitewater kayaking sit-ins might be better since they're easier to paddle.