I'm a big time fan of Game of Thrones and have read all the books of "A Song of Ice and Fire" series by George R.R. Martin. Just like a typical book reader, I have lots of theories, questions and opinion regarding different characters and scenes. I'm looking forward to the next installment "The Winds of Winter". Hopefully it comes out before the show cathes up with the books. (Bad news for us geeks!) In the meantime, "The World of Ice and Fire" has released and I'm devouring it right now. Want to write and share your views? It's free and easy. Join here!
InfoBarrel is a writing platform for non-fiction, reference-based, informative content. Opinions expressed by InfoBarrel writers are their own.
InfoBarrel > Entertainment > Film > Television

What made Dany chain up her dragons?

Khaleesi with her largest dragon - Drogon.

(As seen on the Season 4 Premiere of Game of Thrones)

Did your heart cry when Dany locked her dragons in the catacombs?

No book spoilers ahead, so feel free to read from top to bottom!

Here is my opinion regarding Daenerys Targaryen (also otherwise known as the "Khaleesi" of the great grass sea):

The moment Dany exiled Ser Jorah Mormont in the eighth episode, she has become weak. She cannot easily trust anybody. Her faith was betrayed, by none other than the man who supported and loved her the most. She realized she had been living under the rocks because Jorah had sold her to the usurper who killed her brother, to the rulers who killed her father, to the people who did not even show sympathy for little Targaryen children.

Now when the man comes up with bones of her daughter, burned by Drogon, she loses her mind. She realizes that she is not the mother of dragons, but the mother of beasts. She has no one to counsel her what to do.

This is what made Khaleesi exile Ser Jorah Mormont

Little did Daenerys know what Ser Jorah Mormont of Bear Island was actually spying on her!

However, being a self-obsessed and ignorant girl, she did not hear even a word from him. He had actually tried to help her in hundreds of ways than none - and she treated him like a dog.

What would you do?

You are the Khaleesi, you are the Queen of Meereen and it is your responsibility to keep your people safe from your enemies. Now what if your children themselves are the enemies to your people? What if it turns out that the dragons whom you had once breastfed, are now preying on innocent lives of the citizens of your kingdom?

Daenerys in the catacombs with her two dragons - Rhaegal and Viserion

(From the Season 4 Finale of Game of Thrones)

Watch the scene. Lie down. Try not to cry. Cry a lot!

Seriously, except Oberyn Martell's (minblowing!) death scene, this was one of the most heartbreaking moments of Game of Thrones. Especially, since she has achieved so much and is so close to achieving her goal of going back to her home in Westeros. The soundtrack being played in the background (Breaker of Chains) is a great piece of emotional music too, and adds up our "feels".

But wait up, did she lock up the correct dragons?

The anticipated book has released!

"The World of Ice and Fire" 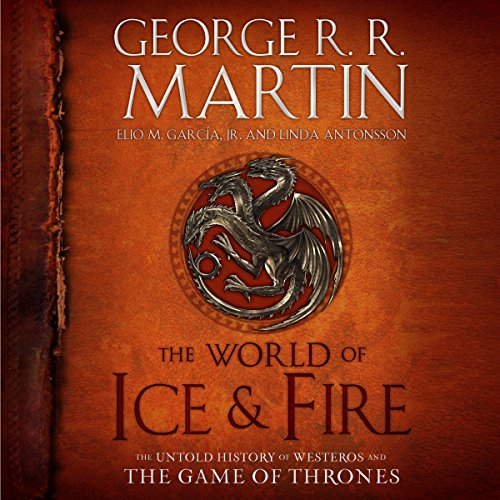 The World of Ice & Fire: The Untold History of Westeros and the Game of Thrones Amazon Price: $42.00 $35.95 Buy Now(price as of Nov 20, 2016)
Although not the next installment based on the storyline, "The World of Ice and Fire" will take you to the places never before seen in the series or books. It will take us to the lands beyond the wall, to the Summer Isles and to the lands of a whole new continent called Sothoryos. So, I repeat again - this is not the Book 6 in the Ice and Fire series. Know what you are buying. The reviews are in and everyone seems to love the pictures (me too!). One of the things that blew me was the mention that Targaryens pretty much sucked at ruling the 7 kingdoms. There are more untold events and stories that will take you far away to the remote corners of the world of ice and fire. Rating: 4 out of 5 stars.

Drogon was the one who killed the little girl. It was his brothers - Rhaegal and Viserion who had to suffer.

Daenerys was so heartbroken that she had no choice but to lock her "good" harmless dragons in the pit. She feared that those two would also turn out to be just like Drogon and burn everything around them. By the looks Drogon has been given much importance in the story, I would certainly call him a mama's boy. What do you think?

Daenerys arrives in Meereen, conquers it, but...

Khaleesi can't control the Slaver's Bay, so what makes the fans think she will ride in one of her dragons, sail to Westeros and conquers it?

Confusion among the show watchers

How to know which dragon is which?

In my own personal opinion, the show creators have stretched themselves far too long. They have this mindset that the viewers know everything! That is why, it took them 39 episodes just to make Khaleesi refer her dragon by its REAL name. It was just in the final episode in season 4 when they decided they would actually "let" Daenerys call her baby by her name. And guess what, they didn't even call the other two dragons by their name.

So here is how you identify the dragons - Drogon, Rhaegal and Viserion.

The largest, the one always with his mother (that's why I call him the mama's boy!). It is named after Dany's husband - Khal Drogo. It has black scales with dark red eyes. Some believe that Drogon is the reincarnation of Balerion, the dread. It was first seen in the show in the tenth episode of the first season - beside his mom on her shoulder. And if you are wondering, yes, it was the same dragon who killed Master Kraznys in Astapor.

Named after Dany's late brother, Rhaegar Targaryen. It has dark green and dark bronze scales. When he breathes fire, it seems as if an orange fireball is shooting out of green leaves.

Also named after Dany's late brother, Viserys Targaryen. His true color is a mixture between cream and gold. Although not mentioned in the show itself, he has the loudest roar among his brothers and it is said that he knows his name.

The left one is Drogon. The top-right is Rhaegal and the one on the bottom right is Viserion.

As seen on season 2 finale inside the house of undying.

What do you think happens with Dany?

Daenerys Stormborn is clearly no longer the scared sister of the beggar kind Viserys. She is no longer a child who had to be taught how to please her husband, how to keep him happy and most importantly, be someone in control.

From the time she was shown as a scared child in the first season, Dany has come up a very long, strenuous and unfortunate road. She has lost her husband, she has lost her only child, but she did overcome all the difficulty. "If I look back, I'm lost!" - this was one of my favorite quotes of the book, A Game of Thrones. With this mindset, she kept going forward. Even at times when her dearest friend Jorah did not support her and told her to do the exact opposite thing, she believed in herself. Bravely, she climbed the pyre and burned herself for the sake of her babies - the dragons!

In tragic turn of events, she can do nothing other than lock her babes. What do you think will be the consequence of this? Will her dragons try to kill her if she approaches them?

Let me know your views in the comments below. As for now, I give you Drogon - the spoiled brat, the mama's boy!

Drogon - The Guilty, The Beast, The Man-eater

Drogon, as seen on the sixth episode of Season 4. Popular as reincarnated Balerion the dread, the winged shadow.