Why House of Cards is Kevin Spacey's Best Work

With the release of the third season of House of Cards on Netflix, we find Kevin Spacey at his absolute best.  For Spacey, a master at playing the snide creep, this is his ultimate role.  Spacey has range, don't misunderstand, but all viewers know deep down what they are looking for when they see Spacey enter a scene.  Some might find the critically-acclaimed House of Cards without scruples, lacking in a moral backbone, or perhaps a thinly veiled attempt for Netflix to have its own HBO-level dramatic hit.  But to say that the show is not good is much like a person claiming to not have a sweet tooth.  You may not crave sweets, but wait until you bite into the chocolate cake and then let your teeth decide.

And that is why House of Cards, and Spacey's performance in it, is so worthy of remark.  It is because the series has teeth.  And in the age of vampires flooding the media content throughout the entertainment industry (not to omit zombies, they've also had a nice run), it is fun to see a drama where the vampire doesn't have any magical powers.  Francis Underwood is human.  And his power does not come from some magical place.

Spacey has had a long, very prolific career.  With two Oscars under his belt, and having acted in some 75 television shows and movies, it is obvious that he is a very fine actor.  But even the finest of actors with the most storied of careers are still looking for that one great role.  I imagine if we were to ask Spacey today whether his role in American Beauty was the highlight of his career, Oscar and all, he would expound on how thankful he was for the opportunity to play Lester Burnham and give a nod to the other people who worked on the film.  But in his gut, he would believe that his greatest performance is still around the corner.

So why is Spacey at his absolute best in the role of Frank Underwood?  Well, in order to establish precedent let us list and explain the five performances that led to Frank Underwood's birth.

In Glengarry Glen Ross we find Spacey playing the rather spineless office manager John Williamson.  But you can only imagine what being on that set with those players did for Spacey.  He was already a very good actor, but playing that role alongside Jack Lemmon, Alan Arkin, Al Pacino and Ed Harris would either prepare an actor for the next stage of their career or send them running for the hills.  And when Alec Baldwin says, "Put that coffee down!", he had unwittingly introduced Spacey to his future.

This eerie role in David Fincher's 1995 thriller, starring a very young Brad Pitt and the voice of a generation, Morgan Freeman, showed the complete lack of scruples necessary to get to Frank Underwood.  For although Underwood has certainly committed all the deadly sins, he still walks among the people keeping John Doe in check.

I have never met a person that didn't love The Usual Suspects.  And Spacey's performance is excellent.  Winning an Oscar for Best Supporting Actor, Spacey would certainly have to take his hat off to everyone involved in that film, because the role was a slam dunk and Spacey did not disappoint.  But there is an old saying, "Power comes to those that will get low enough to pick it up."  And in The Usual Suspects we watch Verbal Kint, and thus Spacey, bend down and do some heavy lifting.

Obviously, American Beauty is Spacey's signature performance.  Winning the Oscar for best picture, Spacey's turn as Lester Burnham spoke to a generation of suburbanites that wanted to stand up to their wives.  And to go from no back bone, ala John Williamson, John Doe and Verbal Kint, to a pillar of strength in a kingdom where all the castles look the same, was indicator that Kevin Spacey really knew what it meant to live in a house of cards.

Certainly not the best film of the bunch, let us remember why we are here.  It is to understand what led Kevin Spacey to the best role of his career.  Frank Underwood would not exist without Buddy Ackerman.  Thus, this film must be listed number one, because although it wasn't Spacey's best performance or his best film, it was the key to unlocking Frank Underwood.

Kevin Spacey has had a true actor's career.  Thus, a career filled with ups and downs.  And to even imply that the roles listed above define Kevin Spacey would be an injustice.  His work has been broad and has shown that to pigeon-hole the man would be a mistake.  But his turn as Frank Underwood is the perfect mesh of these five roles.  The five roles that truly made him famous.  And to watch him in this role is to see Kevin Spacey at his best while reminding us of our worst.  Perhaps House of Cards isn't the best thing that Spacey will ever do, but as Francis Underwood, Spacey always gives us what we want when he walks into a scene. 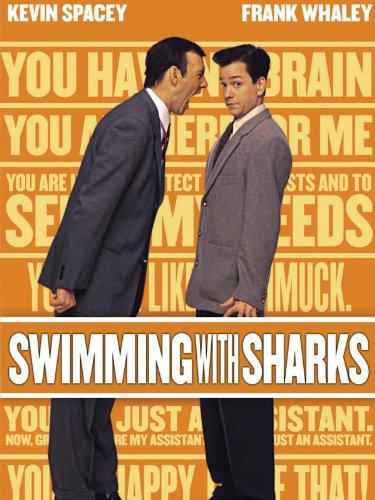 Swimming With Sharks Amazon Price: $2.99 Buy Now(price as of Mar 14, 2015)
Next >> Lifetime Cable Channel Releases Yet Another Tell-All About Marilyn Monroe